Don't Want to Get into the Rat Race of Being a Hero: Aparshakti Khurana

Aparshakti Khurana is getting offers of lead roles with great money, but he doesn't want to rush into it. 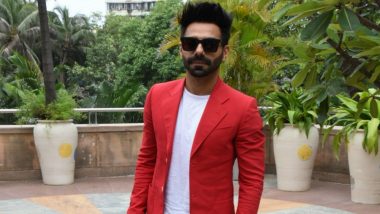 Don't Want to Get into the Rat Race of Being a Hero: Aparshakti Khurana. (Photo Credits: IANS)

New Delhi, March 11: Aparshakti Khurana is getting offers of lead roles with great money, but he doesn't want to rush into it. The actor says he is waiting for the right script and the right part.

"There are a lot of people who approached me after 'Dangal' and 'Stree' to do films in lead roles with great money. But I don't want to rush into it," Aparshakti told IANS on the phone from Mumbai.

"I want you to call me with a happy face that the film is rocking... And that will only happen if I make wise and patient decisions. So I am just kind of waiting for the right script and not jumping the gun and not rushing into it," he added.

From "Dangal", "Badrinath Ki Dulhania", "Happy Phirr Bhag Jayegi", "Stree" to his latest release "Luka Chuppi", Aparshakti, the younger brother of Ayushmann Khurrana, has made his presence felt in the narrative irrespective of the length of the supportive characters.

Directed by debutant Laxman Utekar, "Luka Chuppi", produced by Dinesh Vijan through his banner Maddock Films in association with Jio Studios, explores live-in relationships, and is working well at the box office. Aparshakti feels it is important to prove one's mettle time and again.

Asserting that there is a difference between "being a hero and being an actor", he said: "My modus operandi is to become a better actor." When people look down upon the roles he plays, Aparshakti moves his focus on the love he gets from his fans.

"I was travelling and a guy came to me at the airport and said a very thing cute thing which makes me very happy. He said 'Sir, aapko pata hai aapne hero ke dostun ko respect de di' ('Do you know you gave respect to hero's friends').

"I felt so good about it. And whenever somebody comes and gives me 'gyaan' on doing a lead role or look upon down on me as an actor because I am not doing things in the lead space, I just go back to that conversation and feel happy about it."

He has just started writing his chapter in the Bollywood story, and feels it will get more difficult with time.

"Now is the more difficult part of the journey because earlier people didn't know who you are (I am) and didn't know what you (I) can do. But now people expect a certain kind of performance from you (me). So it is going to be more difficult." On the film front, he is busy with "Jabariya Jodi" and "Street Dancer 3D".

(The above story first appeared on LatestLY on Mar 11, 2019 01:56 PM IST. For more news and updates on politics, world, sports, entertainment and lifestyle, log on to our website latestly.com).