Vikram Bhatt returns to make the Halloween month spookier by dropping a horror flick, Ghost. The film stars Sanaya Irani and Shivam Bhargavaa in pivotal roles. The movie has been produced by Vashu Bhagnani and releases on Oct 18. Here's our review of Ghost. 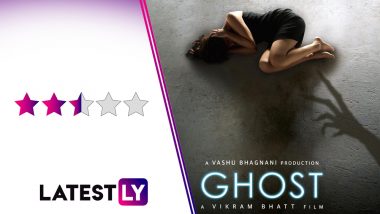 Vikram Bhatt likes to treat his fans with horror flicks time and again. Considering how there are only a handful of directors who want to create horror flicks and producers who want to invest in the same, fans hardly expect any movies from this genre in Bollywood. Hence, having Bhatt in the industry is actually a good thing. Once again, in the midst of the Halloween month, the filmmaker has dropped a horror film, Ghost, which stars Sanaya Irani and Shivam Bhargavaa. As the movie releases today, here's our review of the same.

The plot of Ghost goes like this, Karan Khanna (Shivam Bhargavaa), an Indian politician based out of London, has been arrested for the murder of his wife Barkha. While the prosecutors have strong evidence against Khanna, he is certain that some spirit did it by using him. Enter, Simran Singh (Sanaya Irani), a lawyer who only takes up cases where the facts and proofs are available so she can fight the cases. Initially, she is reluctant to take up the case as the case is a dead-end. However, after experiencing some personal conflicts of her own, she decides to take up Khanna's case and help him receive bail. Things only go downhill for Simran from hereon as she ends up embroiled in the mess caused by the spirit who definitely has ulterior motives of revenge from Karan.

Simple as it is, there are a few twists in the film that actually intrigues you. One of them is the identity of the spirit who is haunting both, Karan and Simran. Second is Simran's father's involvement in all this drama, which is portrayed by Bhatt himself. In terms of storyline, it is not all that bad. Sure, we are done and tired of vengeful spirits but perhaps one more isn't that bad. However, the way it has been handled is not tasteful. Bhatt once again manages to pull off a horror film and even does enough justice to it in terms of the way the story has been penned down. Even if it is a little too simple and predictable, the plot isn't all that bad. However, the problems begin when the main leads take the centre stage.

Sanaya Irani and Shivam Bhargavaa's performance is so terrible that you'd rather watch the ghosts on the big screen over them. Even in the most dangerous and scary situations, Bhargavaa has a faint smile on his face. Why on earth would you smile if you're being slashed by a dark entity or even choked by them? There are scenes where Irani's character is miffed with Bhargavaa's but he still has a smile on his face. Sanaya, on the other hand, is terrible in terms of dialogue delivery. Whenever she tries to enunciate or be very articulate, it only sounds like she's trying too hard. Which brings me to the problems of the dialogues. Who on earth wrote such cringy words?! It really makes you want to look away from the screen because the dialogues are terrible.

Sanaya Irani on Working in Vikram Bhatt’s Ghost: ‘It Was Difficult to Shoot in London Due to the Climatic Conditions’

Also, can Bhatt please move on from jumpscares and give the audience to fear something more than the momentary and forgettable episodes? It's tiresome to be scared one minute and immediately break into laughter the next minute. Sure, the film is supposed to be grim but if you plan to watch it, you will be humoured by the lack of maturity in the acting and the dialogues and the horror sequences. There are so many loopholes in the script that within the first few minutes, you'll want to head out of the theatre!

Vikram Bhatt is known for making horror films. Every year, he comes up with a film that presents a new version of spirits and stories of revenge. But we think it's time he recycles his horrific ideas. There can be spirits and dark entities without the need for revenge or dull backstories.

Although Ghost did have an interesting storyline, Bhatt seemed to have goofed it up with several loopholes. Not to mention how the jumpscares and weird (and funny) faces. We really need to go beyond these basic tactics to scare the audience. It is a forgettable movie and only if you don't have anything better planned for the weekend and want the cheap thrills, should you go and watch this movie. The bad acting might slow things down so be prepared!

(The above story first appeared on LatestLY on Oct 18, 2019 01:25 PM IST. For more news and updates on politics, world, sports, entertainment and lifestyle, log on to our website latestly.com).