The makers of Gunjan Saxena: The Kargil Girl have released a song titled “Dori Tutt Gaiyaan”, it is an inspirational track for all those to never stop chasing their dreams. 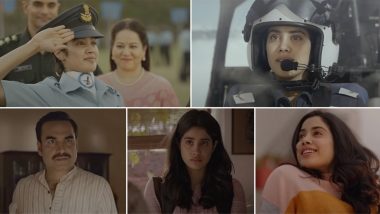 Gunjan Saxena: The Kargil Girl is the upcoming biopic in which Janhvi Kapoor would be seen playing the titular role. It revolves around the life of the first woman Indian Air Force officer who entered the war zone during the 1999 Kargil War. The makers have released a song titled “Dori Tutt Gaiyaan”, it is an inspirational track for all those to never stop chasing their dreams. Gunjan Saxena – The Kargil Girl: Trailer Of Janhvi Kapoor Starrer To Be Out On August 1, 2020! (View Post).

The song “Dori Tutt Gaiyaan” is sung by Rekha Bhardwaj and the music of it is composed by Amit Trivedi. It highlights the journey of Gunjan Saxena, the simple girl who dreamt to become a helicopter pilot. The journey wasn’t easy but she never gave up. She took all the efforts and ensured to give her best to achieve her goals with the support of her family. While sharing the song, the makers wrote, “Those who chase their goals even in the hardest of times get to live their dreams in the end.”

Gunjan Saxena: The Kargil Girl also features Pankaj Tripathi, Angad Bedi and Viineet Kumar in key roles. Directed by Sharan Sharma, this upcoming movie is all set to be premiered on August 12 on Netflix. The film is produced under the banners of Dharma Productions and Zee Studios.

(The above story first appeared on LatestLY on Aug 07, 2020 12:58 PM IST. For more news and updates on politics, world, sports, entertainment and lifestyle, log on to our website latestly.com).