Half Yearly Report 2022: From Yash's KGF Chapter 2 to Kartik Aaryan's Bhool Bhulaiyaa 2  - Biggest Box Office Hits of the Year in Bollywood Till Now!

Check out five Bollywood's biggest hits from January to June 2022 which kept the BO register ringing with its amazing plots, great execution and impressive performances. Read on. 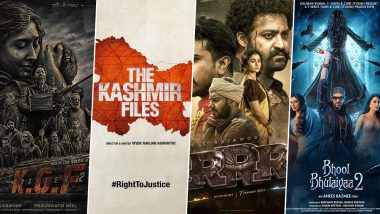 The year 2022 has been a roller-coaster ride for Bollywood, as it saw many ups and downs. Right from audiences shifting their focus to Pan-India releases like RRR and KGF Chapter 2 to Kartik Aaryan's Bhool Bhulaiyaa 2 reviving the Hindi cinema's box office, it was quite an unexpected year. Currently, it's Jugjugg Jeeyo which is minting moolah at the BO. And well, how can one miss the content driven film, The Kashmir Files which broke all the records at the ticket window. Having said that, here today, we celebrate the biggest box office hits as of now. Hollywood Critics Association Awards 2022: SS Rajamouli’s RRR Competes Against Tom Cruise’s Top Gun Maverick, Austin Butler’s Elvis For Best Picture - See Full Nominees For HCA Mid-Season Awards.

Up next, we have Vivek Agnihotri's The Kashmir Files that stands at a lifetime box office collection of Rs 252.90 crore. Starring Anupam Kher, Mithun Chakraborty and more the movie depicts the pain, suffering, and struggle of the Kashmiri Pandit community in 1990.

SS Rajamouli's film RRR, which was also dubbed in Hindi became one of the most loved releases of 2022. Starring Ram Charan, Jr NTR, the Hindi version of the movie surpassed Rs 270 crore at the box office. Also, fans were excited to see Alia Bhatt, Ajay Devgn's cameo in the magnum opus.

Alia Bhatt made audiences emotional with her power-packed performance in this Sanjay Leela Bhansali's movie. In the flick, the actress plays the role of a duped and sold girl to a brothel, who fearlessly reclaims her power, using underworld connections. This one also made waves as it stands at lifetime BO collection of Rs 129.10 crore. Gangubai Kathiawadi Movie Review: In Sanjay Leela Bhansali’s Enthralling New Offering, Alia Bhatt’s Superlative Performance Is Simply Unmissable! (LatestLY Exclusive).

With Rs 184.32 crore at the box office, Bhool Bhulaiyaa 2 happens to be one of the recent hits. Even though, this Kartik Aaryan, Tabu, Kiara Advani-starrer got mixed response, it managed to pull viewers to the theatres, thanks to the stellar starcast. Bhool Bhulaiyaa 2 Movie Review: A Kartik Aaryan Show Trapped in a Spooky Comedy That's Neither Amuses Nor Scares! (LatestLY Exclusive).

Well, these are the five Bollywood's biggest hits from January to June 2022 which kept the BO register ringing with its amazing plots, great execution and impressive performances. What say?

(The above story first appeared on LatestLY on Jun 29, 2022 04:29 PM IST. For more news and updates on politics, world, sports, entertainment and lifestyle, log on to our website latestly.com).