Have Akshay Kumar and Rohit Shetty Dropped Karan Johar From His Producer's Role on Sooryavanshi? Here's the Truth!

While Karan has been off social media since a while now, speculations about him being dropped as the producer of Rohit Shetty's upcoming film Sooryavanshi were doing the rounds. 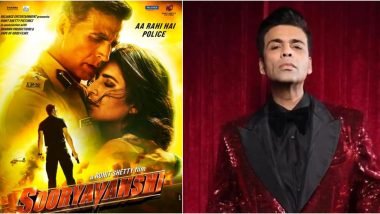 2020 has been a strange year what with coronavirus outbreak bringing nearly everything to a standstill and also being the dark year that has taken away some of most favourite celebrities from us. In the light of Sushant Singh Rajput's sudden demise, the nepotism debate has been raging on social media and many have put the blame of the actor's death on the likes of Karan Johar. The filmmaker has been targetted on social media by netizens for favouring star kids and so on. While Karan has been off social media since a while now, speculations about him being dropped as the producer of Rohit Shetty's upcoming film Sooryavanshi were doing the rounds. Akshay Kumar’s Sooryavanshi to Release on Diwali and Ranveer Singh’s 83 to Hit the Theatres on Christmas This Year?

It all started after a tweet mentioned that the director's production house has been dropped from the film and that the film's lead actor Akshay Kumar and filmmaker Rohit Shetty have returned KJos investment. News like this certainly travels fast and many even believed that this decision could have been taken given the current atmosphere with netizens planning to boycott Karan Johar's work. Although, trade analyst Taran Adarsh took to Twitter to confirm that Reliance Entertainment has denied the news and that it is untrue. Sooryavanshi And '83 To Get A Theatrical Release; Box Office Collection Could See A Jump Of 20% More Than Pre-COVID Days?

IMPORTANT... News doing the rounds of #KaranJohar not being part of #Sooryavanshi is untrue, clarifies #RelianceEntertainment. pic.twitter.com/0IT9qnNdyS

While Sooryavanshi was to release in March this year, the film had to be pushed further due to coronavirus outbreak which forced all theatres to be shut down. While several other releases have embraced the digital medium and are going for OTT releases, it has been reported that Sooryavanshi may get a theatrical release in Diwali 2020.

(The above story first appeared on LatestLY on Jul 01, 2020 11:37 PM IST. For more news and updates on politics, world, sports, entertainment and lifestyle, log on to our website latestly.com).