Akshay Kumar’s Sooryavanshi to Release on Diwali and Ranveer Singh’s 83 to Hit the Theatres on Christmas This Year? 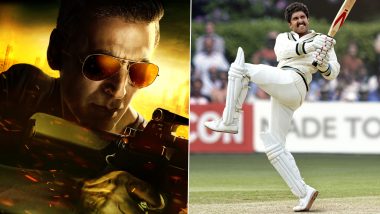 Akshay Kumar and Katrina Kaif starrer Sooryavanshi and Ranveer Singh starrer 83 are the two most-anticipated films of this year. Sooryavanshi and 83 were initially scheduled to hit the theatres on March 24 and April 10, respectively. However, that could not happen since all the cinema halls had to be closed down owing to coronavirus pandemic. Not just Sooryavanshi and 83, but many other films across industries had to be pushed back. But looks like fans of Akshay Kumar and Ranveer Singh are going to be in for a treat during the time of Diwali and Christmas year. Ranveer Singh's 83 Won't Release In Theatres Right After Lockdown Ends, Says Director Kabir Khan.

Here’s the most exciting news of the day for all movie buffs. As per latest developments, Rohit Shetty directorial Sooryavanshi and Kabir Khan’s 83 are set to be released during the time of Diwali and Christmas, respectively. This festive season is going to be special as the announcement has finally been made about two major films that are set to be released in theatres and not on OTT platforms. Trade analyst Taran Adarsh tweeted, “BIGGG DEVELOPMENT... #Sooryavanshi and #83TheFilm to release in *theatres* first... Plans to release #Sooryavanshi in #Diwali and #83TheFilm in #Christmas *IN CINEMAS*.” Will Akshay Kumar's Sooryavanshi Return to Its Original Release Date and Clash with Salman Khan's Radhe?

Here’s The Post On Release Dates Of Sooryavanshi And 83

(The above story first appeared on LatestLY on Jun 30, 2020 09:57 AM IST. For more news and updates on politics, world, sports, entertainment and lifestyle, log on to our website latestly.com).