Following the primary probe, police officials had recorded Kangana Ranaut's statement after reasoning that the emails were purportedly sent from her id. The actress however denied sending emails to Hrithik Roshan. 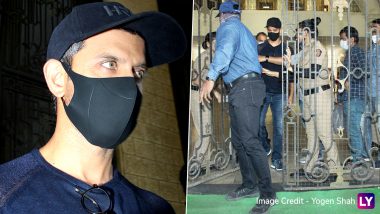 Kangana Ranaut and Hrithik Roshan's alleged relationship was one of the biggest controversies of its time and now years later the issue has been brought up once again. It so happened that Hrithik Roshan visited the Mumbai Crime Branch for questioning today and it has ignited the discussions about the whole dispute once again. Hrithik had earlier filed a complaint that somebody was impersonating him and sending Kangana mails from a duplicate id. Kangana had opposed this and said that the actor himself had given her the email id. Kangana Ranaut Vs Hrithik Roshan Continues! Actress Says 'His Sob Story Starts Again' After Actor's Complaint Transfers To Crime Intelligence Unit.

Hrithik went into the Crime Branch office this morning and has now returned after 3 hours of questioning. Hrithik made sure he keeps himself away from the limelight. His face was covered with a mask and a cap. The media mobbed the actor for answers but he rushed towards his car as soon as possible without addressing the media. Roshan's statement was recorded by a team of CIU officials headed by an assistant police inspector and we can only wait to see what turn will this case take now.

Following the primary probe, police officials had recorded Kangana Ranaut's statement after reasoning that the emails were purportedly sent from her id. The actress however denied sending emails to Hrithik Roshan. In December 2020, the case, which was earlier with the Cyber Cell of the Mumbai police, was transferred to Criminal Intelligence Unit (CIU) on a request made by Roshan's lawyer Mahesh Jethmalani. Hrithik Roshan-Kangana Ranaut 2016 Case: The Actor Arrives At The Crime Branch To Record His Statement.

ANI earlier reported that Hrithik had filed a legal case against Kangana in 2016 after she addressed him as 'Silly ex' during an interview. Hrithik had denied any relationship with her while Kangana has alleged that he has been lying about their relationship. Roshan had then claimed that Ranaut had been sending him hundreds of absurd emails. In 2016, the Cyber Cell had also taken Roshan's laptop and phone for investigation. Hrithik and Kangana had worked together in Kites and Krrish 3.

(The above story first appeared on LatestLY on Feb 27, 2021 05:17 PM IST. For more news and updates on politics, world, sports, entertainment and lifestyle, log on to our website latestly.com).