Hrithik Roshan has arrived at the Mumbai Crime Branch to record his statement regarding a case he filed against Kangana Ranaut in 2016. He argued that someone was impersonated him and sent her mails from a fraud email ID. 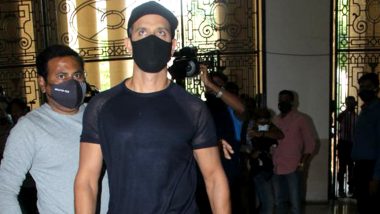 Hrithik Roshan was spotted at the Mumbai Crime branch today. He is there to record his statement in a case that he has initiated against Kangana Ranaut back in 2016. The actor had filed a complaint that somebody was impersonating him and sending Kangana mails from a fraud id. Kangana had rebuffed it saying that the actor himself had given her the email id which they have been using to communicate with each other till 2014. Kangana Ranaut Vs Hrithik Roshan Continues! Actress Says ‘His Sob Story Starts Again’ After Actor’s Complaint Transfers To Crime Intelligence Unit

ANI reports that Hrithik filed a legal case against Kangana after she addressed him as 'Silly ex' during an interview. Hrithik had denied any relationship with her. The actors worked together in Kites and Krrish 3. Check out a few pictures of Hrithik at the crime branch here...

Here's the actor inside the premises of the branch

More power to you. 🔥

Hunt that snake Down. pic.twitter.com/wB04mNts1F

Yesterday, when the news broke out that Hrithik will be at the Crime Branch office today to record his statement in his case against Kangana Ranaut, the latter posted a tweet complete to the 'Silly ex' dig.

(The above story first appeared on LatestLY on Feb 27, 2021 12:30 PM IST. For more news and updates on politics, world, sports, entertainment and lifestyle, log on to our website latestly.com).