Recently, Janhvi had even declared her love for the country through a social media post. She captioned the pictures saying that she has travelled the world but it is India that makes her jump with joy. 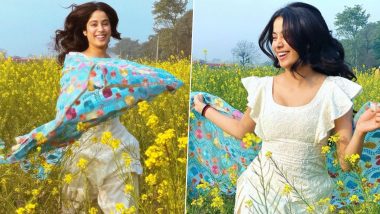 Janhvi Kapoor's Instagram posts are always very interesting. From hilarious captions to glamorous photoshoots, the actress knows how to keep her fans engaged. The actress is currently shooting for her next film Good Luck Jerry in Punjab and is often seen sharing pictures from her time at the sets of the film. She recently had even shared a video of her playing cricket with her crew members and was seen acing many sixes and fours in the video. Now the actress is living her 'DDLJ' moment and has shared a few bright pictures of the same. Janhvi Kapoor Sparkling Like a Sunshine With Her Moods Aplenty for the Digital Promotions of Gunjan Saxena!

Janhvi got to visit the mustard fields in Punjab and did not miss the moment to capture a few pictures there. She is seen running in the farms and looking quite happy while doing it. The actress has opted for a white chicken kurta and salwar for her visit. She added a blue phulkari dupatta to make the outfit look more elegant. Janhvi decided to put on no makeup and just added a little blue bindi that looked absolutely pretty on her. Janhvi even wrote a quirky caption saying that maybe she is a little 'filmi'. Check out her photo below:

Recently, Janhvi had even declared her love for the country through a social media post. She captioned the pictures saying that she has travelled the world but it is India that makes her jump with joy. Janhvi posted a gamut of pictures on Instagram that show her visiting a fort. The first few photos gave the actress posing for the camera while in the last picture she is seen jumping with joy. Roohi Afza: Janhvi Kapoor and Rajkummar Rao’s Horror Comedy to Have a Sequel, Confirms Producer Dinesh Vijan!

Talking about Good Luck Jerry, which is currently being shot in Punjab, the film is directed by Sidharth Sengupta and written by Pankaj Matta. Backed by Aanad L Rai, the film also stars Deepak Dobriyal, Meeta Vashishth, Neeraj Sood and Sushant Singh. Janhvi also has Roohi Afzana with Rajkummar Rao and Dostana 2 with Kartik Aaryan.

(The above story first appeared on LatestLY on Feb 04, 2021 01:02 PM IST. For more news and updates on politics, world, sports, entertainment and lifestyle, log on to our website latestly.com).