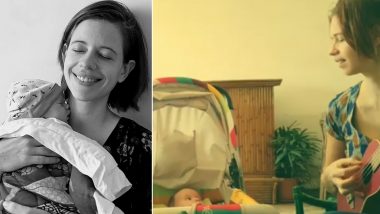 Kalki Koechlin and Guy Hershberg welcomed their baby girl on February 7 and named her Sappho. The lovely mother has never shied away from sharing pics of her daughter. There are numerous cute pictures and videos of Sappho that you’ll see on Kalki’s Instagram account and believe us, you won’t be able to take your eyes off from the cutie pie. Recently, Kalki had shared a video in which she was singing an African lullaby for her daughter. Now this time she has sung a Portuguese lullaby for Sappho and in the video you’ll see how the baby girl is enjoying it. Guy Hershberg Captures Candid Moment of Kalki Koechlin and Their Daughter Sappho (View Pic).

Kalki Koechlin is not just singing the lullaby, but is she is also seen playing the ukulele along with it, and she is playing the instrument really well. When Kalki had shared the video of her singing the African lullaby to her daughter, she had mentioned, “Started learning the uke when I was pregnant to play songs for my baby. It’s worked out well, Sappho either gets excited or falls asleep to them.” This latest video, where baby Sappho is listening to the Portuguese lullaby, she is definitely not sleepy but excited to see her mom entertaining her. While sharing this video, Kalki mentioned, “Nessa Rua This is a Portuguese lullaby I learnt when playing the Portuguese character Tara in the web series ' Smoke' Watch out for the sparrows who make an appearance in our song”. Kalki Koechlin Plays the Ukulele and Sings an African Lullaby For Her Daughter Sappho and It's the Cutest Thing You'll See Today (Watch Video).

Isn’t that a beautiful lullaby? Although we don’t get the meaning, the tune is soothing. And baby Sappho’s reaction to it is even adorable. What do you guys think?

(The above story first appeared on LatestLY on Apr 28, 2020 01:45 PM IST. For more news and updates on politics, world, sports, entertainment and lifestyle, log on to our website latestly.com).