Kangana Ranaut In Legal Soup! Karnataka Police Files FIR Against The Actress For Her Tweet On Protests Against Farmers Bills 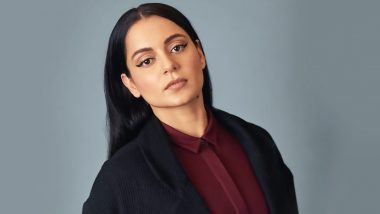 Kangana Ranaut has been grabbing headlines almost every alternate for her statements and tweets. She has been in the war of words with several celebs and high profile personalities. She also posts her direct, unhinged tweets on the ongoing subject, receiving an array of reactions in return. Recently, she had posted a tweet on protests against the farmer bills. This has now landed her in a legal soup. Kangana Ranaut Slams Salman Khan, Akshay Kumar and Others for Filing a Case Against Media Houses, Says 'I Will Continue to Expose You All'.

As per the latest update by Bar And Bench, an FIR has been filed by Karnataka Police against the actress for her controversial tweet. It is registered under the Sections 44, 108, 153, 153(A), 504 under the Indian Penal Code, 1860 (IPC). Earlier, Judicial Magistrate (First Class) Court in Tumakuru, Karnataka had directed the state police to register an FIR against her.

This was after Kangana tweeted against the farmers who were protesting across Punjab against the agriculture bills passed in Rajya Sabha. She received flak for her calling the protesters 'the same terrorists who indulged in bloodshed even as no citizen lost citizenship due to CAA.'

(The above story first appeared on LatestLY on Oct 13, 2020 04:42 PM IST. For more news and updates on politics, world, sports, entertainment and lifestyle, log on to our website latestly.com).