Kangana Ranaut Slams Salman Khan, Akshay Kumar and Others for Filing a Case Against Media Houses, Says 'I Will Continue to Expose You All'

Kangana Ranaut has hit back at the film industry's Bollywood Fights Back initiative. More than 30 production houses, including ones owned by Salman Khan, Akshay Kumar, Shah Rukh Khan, Aamir Khan, Ajay Devgn, have come together to file a suit against certain news channels. 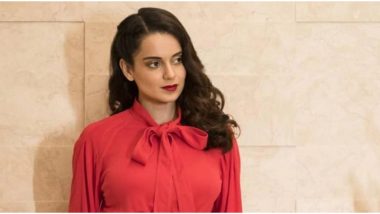 Kangana Ranaut has hit back at the film industry's Bollywood Fights Back move. More than 30 production houses, including ones owned by Salman Khan, Akshay Kumar, Shah Rukh Khan, Aamir Khan, Ajay Devgn, have come together to file a suit against certain news channels like Republic and Times Now. The suit demands the channels restrain from conducting media trials. Quoting Latestly's story, Kangana tweeted and called Bollywood the "the gutter of drugs, exploitation, nepotism and jihad". She added that she will continue to expose the industry until her last breath, and the industry might as well sue her. #BollywoodStrikesBack, she sarcastically tagged her post. Kangana Ranaut Responds to Aamir Khan’s Daughter Ira Khan’s Confession About Depression (Read Tweet).

Kangana further alleged the malpractices in Bollywood. "Big heroes not only objectify women but also exploit young girls, they don’t let young men like Sushant Singh Rajput come up, at the age of 50 they want to play school kids, they never stand up for anyone even if people are being wronged before their eyes," she tweeted.

It did not end here. The Panga actress further alleged loyalty in the industry is based on hiding each others' secrets. #BollywoodStrikesBack: Production Houses Led by Akshay Kumar, Salman Khan, Shah Rukh Khan, Ajay Devgn, Karan Johar and 29 Others File Suit in Delhi HC Against Top Media Houses for Slandering Bollywood.

Their is an unwritten law in the film industry ‘you hide my dirty secrets I will hide yours’ the only basis of their loyalty to each other. Since I am born I am seeing only these handful of men from the film families run the industry. When will this change? #BollywoodStrikesBack

The suit has been filed by DSK Legal on behalf of the Plaintiffs which includes four Bollywood industry associations and 34 leading Bollywood producers. The suit also calls for action to make the Defendants abide by the provisions of the Programme Code under the Cable Television Networks Rules, 1994, and to withdraw, recall and take down all the defamatory content published by them against Bollywood.

(The above story first appeared on LatestLY on Oct 12, 2020 10:40 PM IST. For more news and updates on politics, world, sports, entertainment and lifestyle, log on to our website latestly.com).