The row between Shiv Sena MP Sanjay Raut called Kangana 'haramkhor ladki'. The actress hit back at the politician, saying that with this mentality has empowered the exploiters. Now, a handful of names from the film industry have come forward to support Kangana in this bid including Dia Mirza, Anubhav Sinha. 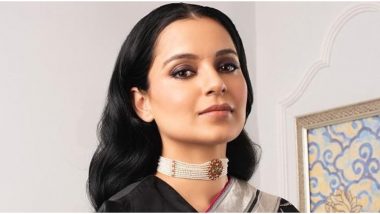 The row between Shiv Sena MP Sanjay Raut and Bollywood actress Kangana Ranaut has taken an explosive turn. After their difference in approach and ideologies became evident on social media, Sanjay called Kangana 'haramkhor ladki' in a conversation with a journalist. The actress hit back at the politician, saying that with this mentality has empowered the exploiters. Now, a handful of names from the film industry have come forward to support Kangana in this bid. Interestingly, the majority of these names are the ones who have had a tiff with Kangana in the past including Dia Mirza, Anubhav Sinha. Swara Bhasker also tweeted about Kangana and Sanjay's row, but not without pointing out that she has been subjected to abuses from right-wing supporters on a daily basis. Kangana Ranaut Reacts to Sanjay Raut's 'Haramkhor Ladki' Remark: 'Every Hour a Girl's Raped in India, Mentality Like Yours Is Responsible' (Watch Video).

Meanwhile, Kangana has announced her return to the city of Mumbai on September 9, ready to face the consequences. She has alleged that Shiv Sena supporters have threatened to break her jaw and kill her, but she's undeterred. National Commission of Women has also taken a stand against Raut and demanded security for Kangana. Kangana Ranaut Should Be Given Police Protection, Says Anil Vij.

People must listen to the language of @rautsanjay61 who is abusing and threatening to @KanganaTeam. @DGPMaharashtra you need to provide proper security to Kangana whenever she comes to state.@HMOIndia @PMOIndia https://t.co/iNiZ3bPPlP

I will believe in the ‘feminism’ of the right wing the day they stop abusing me. That said, such words should not be used against any woman... @rautsanjay61 pic.twitter.com/d6EmoZZaK2

May be the real answer was that it was Maharashtra that opened its doors for the children of Kashmiri Pandits in colleges. That quota still continues. Such is the magnanimity of the city of Mumbai. https://t.co/gWLxMdBld4

Strongly condemn the word ‘haramkhor’ used by @rautsanjay61. Sir you have every right to express your displeasure for what Kangana has said but you must apologise for using such language. https://t.co/6uY3AObCcw

Yes. I equally condemn abusive behavior and language towards both Kangana and Rhea.

Don't be selective in your respect for women. https://t.co/D5wl5HnKvs

Even KRK Called Out The Abusive Language

You can oppose. Even You can criticise. If you don’t agree with someone. But you can’t call a girl #haramkhor on national TV when you are a representative of public.

A woman is being called "#haramkhor" and the #placard gang, #TukdeTukde gang, #KittyPartyJournalists & #UrbanNaxals seem to be missing in action. Their silence is a strong support to misogyny, where a politician can get away with abusing an actress.#KanganaRanaut

The controversy began when Kangana criticised Mumbai Police and alleged inefficiency in handling probe of Sushant Singh Rajput case. She said she's more scared of the city's police than 'movie mafia'. This did not settle well with Shive Sena and Sanjay asked her to not return to the city. To which she compared Mumbai to PoK.

(The above story first appeared on LatestLY on Sep 06, 2020 05:50 PM IST. For more news and updates on politics, world, sports, entertainment and lifestyle, log on to our website latestly.com).