Karan Johar shared a video of his kids Yash and Roohi fidgeting with the luggage and all set to leave the house with an aim to head to the airport. Watch. 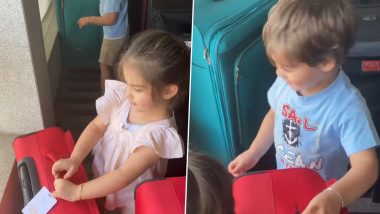 Karan Johar kids are back to entertain us. As the filmmaker recently shared a video on his Instagram and it sees his twins creating a ruckus inside the house along with luggage. After making one and all go ROFL with dancing to a Bollywood melody, commenting on KJo's tummy to even yelling at their father and telling him to stop singing, the little Johar's have done it all. And this time, the two wants to leave the abode and go to the airport. In the video shared, we see Yash and Roohi fidgeting with the bags and wanting to fly ASAP. Karan Johar Legit Gets Termed as a 'Monkey' and No Brownie Points For Guessing Who Said That! (Watch Video).

The clip starts with Karan asking his two kids on where are they heading? To which Roohi replies by saying 'airport'. After hearing this, the director tells the munchkins that all things are shut and there are no flights taking anyone anywhere. However, Yash then answers to Karan by saying he and Roohi will hide inside the bag and travel. When Karan asks about how he will travel, to which they reply that he will also come with them by getting inside the bag. Captioning the post, Karan wrote, "Porters in Pret a porter! #lockdownwiththejohars #toodles." Fed Up and Leaving: Karan Johar’s Kids Yash and Roohi Are in No Mood for His Quarantine Videos Anymore!

At the end of the clip, we also see cutie Yash playing with the luggage bags and amidst the same a huge bag falls on him, but however, he gets saved. Must say, Karan, is keeping his fans glued to his Instagram. Meanwhile, on the work front, Karan's next is Takht which stars Ranveer Singh, Vicky Kaushal, Kareena Kapoor Khan, Bhumi Pednekar, Janhvi Kapoor and Anil Kapoor. Stay tuned!

(The above story first appeared on LatestLY on May 23, 2020 05:58 PM IST. For more news and updates on politics, world, sports, entertainment and lifestyle, log on to our website latestly.com).