Fed Up and Leaving: Karan Johar’s Kids Yash and Roohi Are in No Mood for His Quarantine Videos Anymore!

Karan Johar's Kids, Yash and Roohi are fed up of his father's Instagram habit and here's proof! 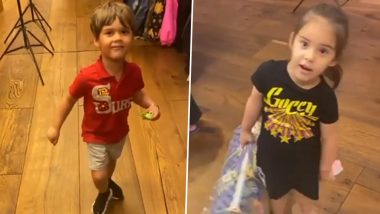 Karan Johar and his kids, Yash and Roohi are our daily dose of laughter. As from the time KJo has started sharing 'Lockdown with the Johar's' series on his Instagram, we as well as fans are loving it and how. The tiny tots are super hilarious and cracks up fans each and every time they make a glimpse on the filmmaker's Insta feed. However, this time around Yash and Roohi seems to be annoyed and are fed up of dad's regular habit to shoot via the camera. In the latest IG story, Karan's twins are seen in his closet throwing some shade at him. Karan Johar's Kids Yash And Roohi Make Him Weep - Here's How (Watch Video).

In the IG clip, the kids can be seen in a mood to take a dig at Karan and so first we see Yash yelling at his dad and saying, "Don't take my video, am fed up." "Tantrum! He's fed up of my camera," KJo captioned the video. On the other hand, Roohi can be seen with a packed bag and is all set to leave the Johar's abode. When Karan quizzes Roohi where is she going? The girl answers, "Am leaving this house.. going to Peppa house." The video is really adorable. Karan Johar's Kids Yash and Roohi Throw A 'Stupid' Shade On Dadda's Sunglasses Game (Watch Video).

Check Out Karan Johar's Video With Yash and Roohi Below:

Karan's kids have made fun of him every single time. From turning into a stylist to joking over the filmmaker's tummy, the kids have left no stone unturned to mock their paa. However, nothing to be taken seriously as KJo and his children bring a smile to many faces amid lockdown. Recently in live chat with Varun Dhawan Karan also flashed his grey hair. Stay tuned!

(The above story first appeared on LatestLY on Apr 28, 2020 05:52 PM IST. For more news and updates on politics, world, sports, entertainment and lifestyle, log on to our website latestly.com).