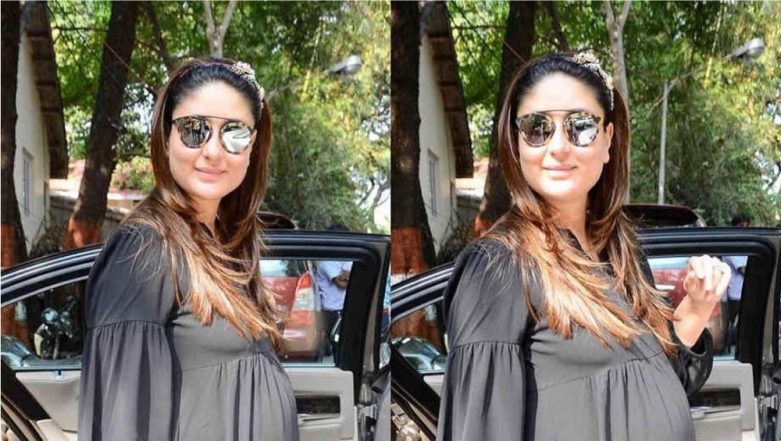 Kareena Kapoor Khan is one star that never fails to amaze the fans with her sass, talent and beauty. Her every outing is like fashion goals for the netizens who, excitedly take cues from her style diaries. Yet again, she was spotted outside but this time not her fashion game but her baby bump stole all the attention. For those who are confused, let us remind you that Bebo is shooting for the film named 'Good News'. Fans are speculating that this picture is for the same film. Kareena Kapoor Khan's New Magazine Photoshoot Proves All That Glitters IS Gold - View Pics.

A few days ago too, she was spotted on the sets of the film flaunting this baby bump which solely there for her role in the flick. The flick that also stars Akshay Kumar, Kiara Advani and Diljit Dosanjh is reportedly about an older couple who are trying to have a baby for seven years and a younger couple helping them out for it. Speaking of these pictures, the pics will instantly remind the fans of her gorgeous maternity shoot that was in monochrome. Check out the pic below.

Meanwhile, she has been constantly asked about being a hands-on mother to her popular kid, Taimur Ali Khan. The two-year-old baby has created a stir on social media with his cute antics and Bebo is naturally overwhelmed by it. She also recently got roped in as the brand ambassador of Swasth Immunised India Campaign. The campaign is about immunization of babies who are under two years even in the remotest village of the country. Moving on to her films, she will be also seen in a period drama called Takht post this film.