Birthday Boy Kartik Aaryan has got a few interesting projects lined up which includes Anees Bazmee's Bhool Bhulaiyaa 2 and Karan Johar backed Dostana 2. On Kartik's 30th birthday, lets quickly take a look at all his upcoming projects in the near future. 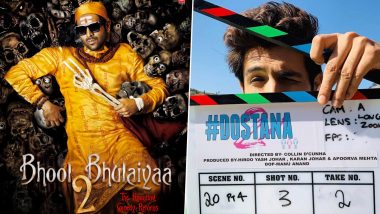 Kartik Aaryan turns 30 today and the actor made his acting debut with Luv Ranjan's 2011 film Pyaar Ka Punchnama while he was in the third year. The actor got noticed from his comedy monologue that was praised by the audiences and the film introduced a charming new-age hero in Bollywood. Kartik got commercial success with Luv Ranjan's Sonu Ke Titu Ki Sweety that entered the Rs 100 crore club at an ease. Kartik is an entertaining artist and his choice of scripts proves he is there in the industry to put a smile on our face. Image:Kartik Aaryan Shares Picture in Long Locks, Gets Compared to Keanu Reeves (View Pic)

Kartik Aaryan's last outing was with Imtiaz Ali titled Love Aaj Kal that flopped at the Box-office but his other two recent films Pati Patni Aur Woh and Luka Chuppi were a hit. The actor has got a few interesting projects lined up which includes Anees Bazmee's Bhool Bhulaiyaa 2 and Karan Johar backed Dostana 2. On Kartik's 30th birthday, lets quickly take a look at all his upcoming projects in the near future. Lakme Fashion Week 2020: Kartik Aaryan in Manish Malhotra’s Ruhaaniyat Collection Looks Elegantly Royal (View Pics)

Reports in media are doing rounds that Shah Rukh Khan is all set to back a romantic-comedy with Kartik Aaryan the lead. According to a report in PeepingMoon, SRK’s Red Chillies Entertainment is in early talks to sign the Luka Chuppi actor. However, As of now, no official confirmation has been made by either Shah Rukh's production banner or Kartik Aaryan.

Another media reports state that Kartik Aaryan will team up with Neerja and Aarya fame Ram Madhvani for a thriller film. A report in a leading daily says Kartik Aaryan is a fan of filmmaker’s 2016 hit Neerja and is in talks with him for a year. Reports also suggest that both Ram Madhvani and Kartik have discussed several ideas but the 30-year old has not given a nod to the project.

Kartik Aaryan and Laxmii actress Kiara Advani began filming for Anees Bazmee's Bhool Bhulaiyaa 2. The film is a sequel to Akshay Kumar, Vidya Balan's 2007 horror-comedy Bhool Bhulaiyaa. Earlier in August last year, Kartik even shared his look similar to that of Akshay Kumar in part one. The film is expected to be a laugh riot but the makers haven't yet announced its new release date yet.

Karan Johar produced Dostana 2 is a sequel to 2008 Tarun Mansukhani directorial that featured Priyanka Chopra, Abhishek Bachchan and John Abraham in the lead. The sequel stars Kartik Aryan and Janhvi Kapoor and the duo is reportedly playing each other's siblings. The film went on floors last year in Punjab and no official release date has been announced by the makers yet.

(The above story first appeared on LatestLY on Nov 22, 2020 11:21 AM IST. For more news and updates on politics, world, sports, entertainment and lifestyle, log on to our website latestly.com).