Kartik Aaryan Trends On Twitter, Makes His Mother Tense And All That Because Of Shehnaaz Gill 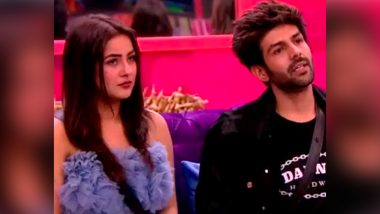 Last night post-midnight, Kartik Aaryan tweeted that his mother will get worried to see his name trending on Twitter. Mostly because he has no clue how his name landed on the trends list. Initially, he was savouring the moment when he first saw his name up there. But guess the suspense got him really worked up and he asked his fans to fill him in. Well, they definitely obliged. They revealed to the actor that he had commented on one of the posts of Bigg Boss fame Shehnaaz Gill's and that has made him a subject of discussion on Twitter. Kartik Aaryan Shares an Old Memory When He Jumped Barricades to Meet Sagarika Ghatge and Deliver a Message for Shah Rukh Khan!

Shehnaaz had posted a message to respect all, to which Kartik commented asking what about the person who ate the bat first? It obviously was his way of hinting towards the COVID-19 pandemic. Let us tell you how Kartik reacted first.

Then he got impatient for some answers...

because you followed Shehnaaz and commented on her post :)

Thank you very much !! #ShehnaazGill

Now, here's the conversation that got KA trending on Twitter.

So we #Shehnaazians r very happy, excited & doing trend for u @TheAaryanKartik

Well, we would like to commend Kartik for using Twitter so well. He let his fans help him answer his question and they obliged. What an amazing way of engaging with them during the time when there's no movie to promote or shoot!

(The above story first appeared on LatestLY on Jul 01, 2020 02:53 PM IST. For more news and updates on politics, world, sports, entertainment and lifestyle, log on to our website latestly.com).