Time To Dance is directed by Stanley D'Costa, who has worked as an assistant to choreographer-director Remo D'Souza earlier. 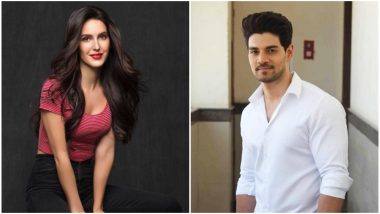 After a disastrous debut in Salman Khan produced Hero and the controversies surrounding his involvement in Jiah Khan suicide, Sooraj Pancholi has finally greenlighted his second movie. Since his forte is dance, his second movie is revolved around this art-form too. Time To Dance, the movie's title, is directed by Stanley D'Costa, who has worked as an assistant to choreographer-director Remo D'Souza earlier.

Now Sooraj Pancholi has found an interesting female lead opposite him in Katrina Kaif's younger sister, Isabelle. Though this is her first Bollywood movie, Isabelle had a small role in the international movie, Doctor Cabbie.

Sooraj Pancholi had confirmed the news when he shared a picture of Isabelle on his Insta account.

It’s official guys! A huge shout out to my co-star @isakaif .. get ready for our film!#TimeToDance Look forward to working with her!

Earlier in an interview to Mumbai Mirror, Isabelle had revealed details of her first Hindi movie. She had said“I can’t wait to start work on my first Hindi film. We will be in London for around 50 days and will shoot in a start-to-finish schedule. I started dancing as a kid, so I always wanted to be a performing artiste. I always had that creative side. Acting came little later and it actually came when I saw dancing in the films. That’s when I knew that I always want to do this.”

As per a report in HT, Isabelle is playing a ballroom dancer, while Sooraj is playing a street dancer. Both the actors have been prepping for the role for the past one and a half years. Time to Dance will go on floors from this month.

Interestingly, Katrina Kaif herself is playing the lead in what is touted as India's biggest dance film made by Remo D'Souza. Her co-star in the movie is Varun Dhawan.

(The above story first appeared on LatestLY on Mar 30, 2018 07:14 PM IST. For more news and updates on politics, world, sports, entertainment and lifestyle, log on to our website latestly.com).