Khaali Peeli: Makers to Shoot the Remaining Portions with Ishaan Khatter and Ananya Panday in mid-August?

Khaali Peeli, starring Ishaan Khatter and Ananya Panday, is touted to be a masala entertainer. Directed by Maqbool Khan, this film is reportedly the remake of Vijay Deverakonda starrer Taxiwaala that released in 2018. 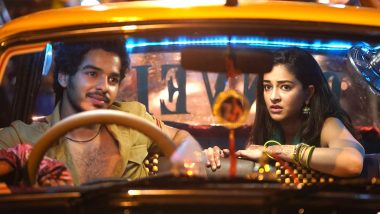 Khaali Peeli, starring Ishaan Khatter and Ananya Panday, is touted to be a masala entertainer. Directed by Maqbool Khan, this film is reportedly the remake of Vijay Deverakonda starrer Taxiwaala that released in 2018. The shooting of film started in September last year and had to be halted owing to the coronavirus outbreak. There is a few portion reportedly pending to be completed and that the makers are planning to shoot it by mid-August. Ananya Panday Reveals How the Schedule of Khaali Peeli Was Affected Due to Coronavirus Outbreak.

A source from the production team of Khaali Peeli revealed to Mid-Day how the makers are planning to finish shooting the pending sequences. The source was quoted as saying, “We have a few sequences remaining to be shot with Ishaan and Ananya. Director Maqbool Khan intends to film the portions around August 20 and is in the process of zeroing in on an indoor studio for the two-day shoot. The post-production work on the action thriller has been going on in full swing in the past few months.” Ali Abbas Zafar, the producer of the film confirmed saying, “We will be shooting in adherence with the safety guidelines. The film is otherwise edited and ready.” Khaali Peeli to Go OTT Way? Ali Abbas Zafar Reveals Current Status of Ananya Panday-Ishaan Khatter's Film.

Since quite sometime the buzz has been doing rounds that the makers are planning to release the film on an OTT platform. About it the source further mentioned, “Khaali Peeli is a typical masala entertainer. Ali sir has initiated talks with streaming platforms for its direct-to-web release.” Since there is no clarity by when the cinema halls will re-open, there are several films that are skipping theatrical release and opting for OTT platform.

(The above story first appeared on LatestLY on Aug 07, 2020 08:38 AM IST. For more news and updates on politics, world, sports, entertainment and lifestyle, log on to our website latestly.com).