Khiladi actress Ayesha Jhulka has put forth her wishlist about the cast of the film if it ever gets remade. She believes Varun Dhawan would be good in Akshay Kumar's role while Alia Bhatt or Janhvi Kapoor can step into hers. There is a reason why she named Janhvi and it sounds a bit partial. 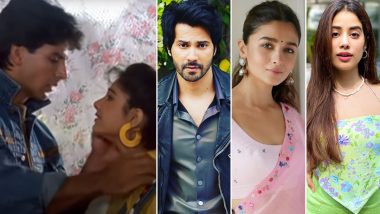 Khiladi that released in 1992 gave Akshay Kumar's career the boost he needed back then. He is one actor who didn't have to rely on Dharmas and YRFs of the world to become a bonafide superstar. His martial arts skills made him one of the most loved action heroes of the 90s. Now when we hear about remakes of the movies from that decade we fear one day, Khiladi might follow suit. While we are dreading the thought, Ayesha Jhulka, Akshay's love interest from the film, believes Varun Dhawan would be good in the actor's role while Janvhi Kapoor can step into hers. Or maybe Alia Bhatt too. Has Karan Johar Stopped Following Varun Dhawan, Alia Bhatt, Sidharth Malhotra and Other Celebs on Twitter? Here’s the Strange Twist Behind His ’Reduced’ Followers!

Speaking to Times Of India, Ayesha casts, "Varun Dhawan in Akshay's role and Janhvi Kapoor as the female lead as I am very fond of her and she can look like the character. Even Alia can pull it off. But who will play Deepak Tijori and Sabeeha? It's very tough to answer that."

How can I forget Abbas Mustan bhai...it’s not just a film for me but a stepping stone in my career, a title which is now synonymous with me. Thank you for giving me #Khiladi 🙏🏻 https://t.co/VEpiUBpQyu

We wonder if the choice of Varun Dhawan comes from the fact that lately the actor is busy doing remakes a lot. First Judwaa 2 and now Coolie No 1. Guess he is the go-to remake guy!

(The above story first appeared on LatestLY on Jan 13, 2021 02:04 PM IST. For more news and updates on politics, world, sports, entertainment and lifestyle, log on to our website latestly.com).