Aamir Khan and Kareena Kapoor Khan's Laal Singh Chadddha released in theatres on August 11. However, sadly the film is the latest victim of piracy, as it has been leaked online for free watch and download. 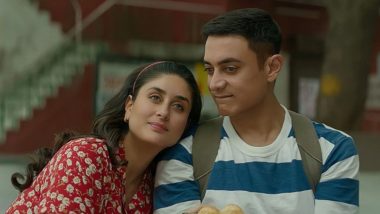 Advait Chandan's directorial Laal Singh Chaddha released in cinema halls today (August 11). Since then, the film has been trending on Twitter. Starring Aamir Khan and Kareena Kapoor Khan as the leads, the movie is an official Hindi remake of Hollywood classic Forrest Gump. Having said that, LSC also has a cameo by Shah Rukh Khan. However, unfortunately, within a few hours of its release in theatres, Laal Singh Chaddha has leaked online. The film is now available for streaming on torrent sites. There's an HD print available of the show to watch online. Laal Singh Chaddha: Ranveer Singh and Deepika Padukone Arrive in Uber Cool Outfits at Aamir Khan’s Film Screening in Mumbai (Watch Video).

Laal Singh Chaddha full movie in HD has been leaked on several torrent sites like Filmywap, Onlinemoviewatches, 123movies, 123movierulz, Filmyzilla, and other pirated versions of the series in HD (300MB free download in 1080p, 720p, HD online) are available for the audience to watch.

However, this is not the first time a movie has been leaked online for free watch. As almost every film falls prey to this. In the past, many strict actions are taken against these sites, but even after getting blocked, god knows from where the site bounces back promoting piracy. Well, a lot goes into making a flick and these online leaks of popular films need severe action.

(The above story first appeared on LatestLY on Aug 11, 2022 09:24 AM IST. For more news and updates on politics, world, sports, entertainment and lifestyle, log on to our website latestly.com).