Laxmii is a horror-comedy directed by Raghavendra Lawrence, who has remade his hit Kanchana. Akshay Kumar and Kiara Advani play the leads in the film, that also stars Sharad Kelkar, Ayesha Raza Mishra, Manu Rishi Chadha and Ashwini Kalsekar. Laxmii is streaming on Disney+ Hotstar, 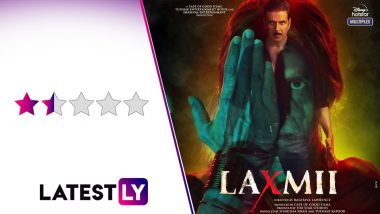 Laxmii Movie Review: Laxmii is a paradox, alright! It is clearly made for the front-benchers, most of whom are now wanting to boycott the film for silly reasons (though after watching it, I admit they are quite lucky if they did so), and went straight for OTT release. Laxmii speaks about transgender rights and equalities, but then casts a male actor in the role instead of an actual transgender actor (ironically, the cast actor is the best part of the movie). And Laxmii gives the hero a side job of dispelling blind beliefs and superstitions, but then negates everything that he stood for the rest of the movie. Laxmii First Reviews Out: Akshay Kumar's Horror Comedy Gets Polarised Reactions From Critics.

I knew what I was in for, having already seen the original Kanchana. Raghavendra Lawrence, who was both the lead and the director of the film, adapts Kanchana with certain cosmetic changes in the plotting. So the hero is no longer a cowardly singleton, pampered by his family and fearful of ghosts. He is now Asif (Akshay Kumar), a businessman/social activist, married to a Hindu girl, Rashmi (Kiara Advani). This gives Akshay two more social causes to preach upon - Hindu-Muslim unity and blind bhakti (ahem, ahem) - apart from the already prevalent main message.

Anyway, Rashmi's family hasn't spoken to her for the past three years since they have gotten married, but one day, her mother (Ayesha Raza Mishra) manages to break that ice and call them home. Her father (Rajesh Sharma) is still annoyed with his son-in-law, though I am not really sure if it was just the religious differences, or the clearly evident age-disparity between the couple.

Things become spookier when Asif takes the kids to play cricket in a neighborhood courtyard, that is rumoured to be haunted. While they never get to play the match, what Asif didn't know then that they unintentionally brought an uninvited guest to the house. And all hell breaks loose, both in that villa and on our senses.

Watch the trailer of Laxmii:

While Lawrence did change the plotting and the characters, he has kept the same situations, the same setting and the same tone from the original. So Laxmii, more or less, shares the same flaws as Kanchana, which has dated terribly. The comedy is loud and farcical, leaving some very talented bunch of actors like Raza, Sharma, Manu Rishi Chadha and Ashwini Kalsekar to ham like there is no tomorrow. There is a bit too much reliance to eke out laughs from people slapping each other, as if everyone is prepping for the next Housefull movie. OTT Releases Of The Week: Akshay Kumar’s Laxmii, Abhishek Bachchan’s Ludo, The Crown Season 4, Suriya’s Soorarai Pottru, Rajkummar Rao’s Chhalaang and More.

The songs are roughly forced into the narrative, especially the much-talked about "Burj Khalifa" song. The spooks are as scary as someone's slapping a mosquito near you. Not to mention there are needless strands put in. Like what was the need to have Asif's orphaned nephew in the film? He disappears from the movie after the first act. Or for the matter, Rashmi's pregnant neighbour and her sister, who get an entire scare sequence for themselves. They add zero value to the plot.

Even Akshay Kumar, an actor who can otherwise resuscitate a lifeless comedy, struggles in many places. Even the portions of him acting as 'Laxmii' see him trying too hard, especially when the actor who actually plays that role, does an amazing job with it. Kiara Advani hardly gets to do anything, except look pretty.

The only bright spot comes when we get to hear the ghost's backstory. Not only does it bring the pitiable situations of the transgenders to the spotlight, the portions manages to show the dexterity of Sharad Kelkar, a truly underrated actor. His performance was on par with the original 'Kanchana', the inimitable R Sarathkumar, and both the actors remain the sole bright spot of their films, which, sadly, doesn't have much to offer you, other than deafen your ears with loud comedy, loud melodrama and loud BG score.

- The Message in the Third Act

- Rest of this Farcical Comedy

Did Laxmii save itself from a botched box office performance by releasing on Disney+ Hotstar directly? Going by what it has to offer, even Akshay Kumar's superstardom would have struggled to not let this Laxmii 'bomb' at the theatres!

(The above story first appeared on LatestLY on Nov 09, 2020 10:18 PM IST. For more news and updates on politics, world, sports, entertainment and lifestyle, log on to our website latestly.com).