UAE's Khaleej Times and Gulf News have published the reviews for Laxmii. It's a mixed affair. Khaleej Times spared no words to criticise the film. Gulf News' critic found the film entertaining. Here are the excerpts from the reviews of Laxmii. 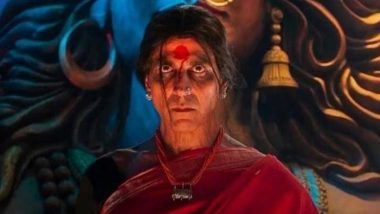 Akshay Kumar's first big release this year Laxmii is headed straight to OTT amid the pandemic. it's pathbreaking in its own right. Then, the actor cross-dresses in the horror-comedy after being possessed by the ghost of a transgender person. Which again, puts him in a rare league. The actor has earlier played a gay man in a cameo in Dishoom. The movie, directed by Raghava Lawrence, releases on Disney Hotstar on Monday, a festive treat for the fans of the actor. A remake of Lawrence's Tamil film, Kanchana 2, the movie has created quite a hype leading up to the day. Laxmii: Raghava Lawrence Pens Heartwarming Note Ahead of Akshay Kumar Film’s Disney+ Hotstar Premiere, Khiladi Responds (Read Tweet).

But will the movie live up to the expectation of the fans or the critics? That's something which will keep the internet talking over the next one week. For now, the first reviews of the film are out. UAE's Khaleej Times and Gulf News have published the reviews for Laxmii. It's a mixed affair. Khaleej Times spared no words to criticise the film. Gulf News' critic found the film entertaining. Here are the excerpts from the reviews of Laxmii. Laxmii: Akshay Kumar and Kiara Advani's Film To Not Have a Theatrical Release In India, Contrary to Certain Reports.

"The usually reliable Kumar seems out of depth in this poorly-written, clunky film and seasoned actors like Ayesha Raza Mishra and Ashwini Kalsekar’s brand of humour is mind-numbingly mirthless. The chemistry between Advani and Kumar is barely there and the back story of the transgender ghost seems outdated and archaic. The usual tropes attached to a Hindi horror potboiler, such as an abandoned plot of land filled with corpses and screechy ghosts, have all been thrown into this confused conundrum of a film."

Akshay Kumar plays Laxmii with as much subtlety as a Bollywood hero possessed by an alien spirit. Kiara Advani has little to do but look pretty and act the supportive wife. The rest of the cast liven up the movie with their antics. Rajesh Sharma and Ayesha Mishra as Rashmi’s parents display their comic chops as does Ashwini Kalsekar - though the comedy is all about contorting their facial muscles to the extreme.

Laxmii is loud, garish and over the top - just the kind of movie that is needed to shake Bollywood out of its stupor post the pandemic probably. If you enjoy mindless entertainers that pay lip service to a social cause and believe Khiladi Kumar can make no wrong move on the big screen only then go for Laxmii.

In no time, the critics in India will also give their verdict about Laxmii. Stay tuned for more updates on the movie and LatestLY's review of it.

(The above story first appeared on LatestLY on Nov 09, 2020 08:34 PM IST. For more news and updates on politics, world, sports, entertainment and lifestyle, log on to our website latestly.com).