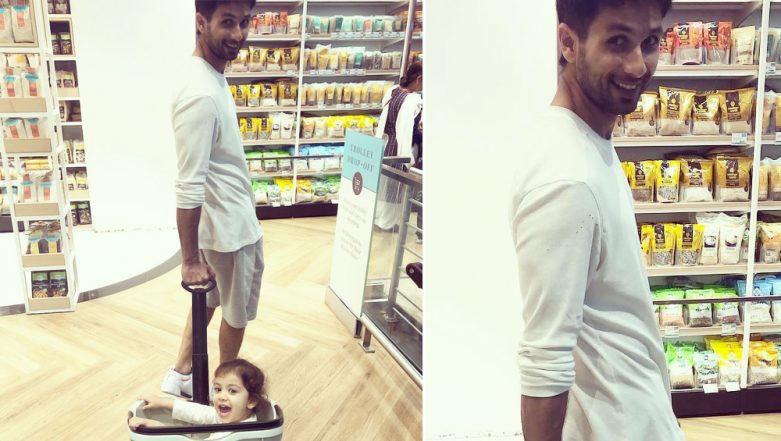 Shahid Kapoor and Mira Rajput's little girl, Misha Kapoor is one cute bundle of joy. We have often seen Shahid and Misha having a fun time with each other from dancing to everything else. Misha's sure her 'daddy's lil girl'. This time, Misha took to Instagram to share one of the cutest things you will see today.

Mira shared an adorable picture of Misha and Shahid from the grocery store. The cute one is seen seated in the grocery cart while dad Shahid is seen dragging it. In the picture, Misha's excited expression will truly make your day. If the photo is any less cuter, Mira sure knows how to write one funny caption.

Sharing the picture, she wrote, "Fresh produce!! Which aisle stocks these sweet treats?" Well, we have to agree with her on this, the father-daughter sure look like sweets we all want in our life.

The picture seemed to become one big delight for the fans and in no time, comments started flooding on Misha's adorable quotient. Just like Taimur Ali Khan, Misha Kapoor is another star-kid who received a lot of love from Bollywood fans. Misha Kapoor and Isana Kapoor's Adorable Moments Playing on a Beach Cannot be Missed! (View Pics)

On the film front, Shahid is all set to be seen in the Bollywood remake of South hit, Arjun Reddy originally starring Vijay Deverkonda. The film stars Kiara Advani along with Shahid.