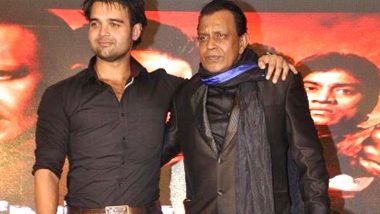 An FIR has been registered against the son and wife of veteran Bollywood actor Mithun Chakraborty for alleged rape and coercion of a girl in Mumbai, police said on Saturday. According to the police, the FIR was registered against Chakraborty's son Mahaakshay and his wife Yogeeta Bali at Oshiwara police station in Mumbai on October 15. The woman, in her complaint, had said that she was in a relationship with Mahaakshay since 2015 and that Mahaakshay had once drugged her with a soft drink and forced physical relations with her without her consent. Kangana Ranaut In Legal Soup! Karnataka Police Files FIR Against The Actress For Her Tweet On Protests Against Farmers Bills

She alleged that Mahaakshay had promised marriage to her but never fulfilled his promise. The woman said she had tried to get an FIR registered in the case in Mumbai but the police did not register the matter. Later, she shifted to Delhi, where she appealed to a Delhi local court seeking directions for the registration of an FIR. FIR Against Kangana Ranaut in Karnataka Over Her Tweets Allegedly Comparing Farm Bill Protesters to Terrorists

Mumbai: FIR registered against wife and son of actor Mithun Chakraborty - Yogeeta Bali and Mahaakshay - at Oshiwara Police Station over allegations of rape, forced abortion and cheating by a model.

The court, on the basis of whose prima facie evidences, ordered to register an FIR in the case, after which an FIR was registered at the Oshiwara police station in Mumbai.