Not Her Wardrobe, But Khushi Kapoor's Inspiring Tattoo Grabs Our Attention in This Airport Click!

Amid the COVID-19 pandemic in India, many Bollywood celebs are getting papped at the airport. Adding to the list, last night it was Khushi Kapoor who was clicked arriving back to Mumbai. However, this time on the airport runway, it was not her wardrobe, but the inspirational tattoo that grabbed our attention. Read on. 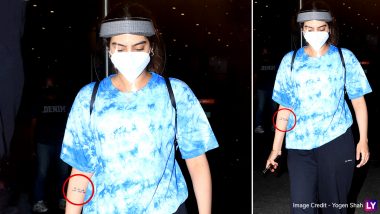 Amid the COVID-19 pandemic in India, many Bollywood celebs are getting papped at the airport. Adding to the list, last night, it was Khushi Kapoor who was clicked arriving back to Mumbai. Well, whenever Khushi makes a public appearance, her fashion becomes the talk of the town. However, this time on the airport runway, it was not her wardrobe, but something inspirational that grabbed our attention. Yus, you read that right! Khushi made a stylish splash, however, it was her tattoo that's all over the internet. Khushi Kapoor To Make Her Acting Debut Soon! These 7 Pictures Prove Sridevi – Boney Kapoor’s Daughter Is Ready To Face The Reel World.

Khushi was seen donning a pair of track bottoms paired with a tie-dye tee in blue and sneakers. But, it was the tattoo on Janhvi's sister's right arm that snatched the attention of the paps. Her tattoo read -"The rest will work itself out." Well, that's surely a thoughtful quote during the COVID-19 crisis in India. FYI, Khushi was back to the bay from the US. Khushi Kapoor Makes Her Instagram Account Public! Sridevi’s Daughter's Profile Is All About Family And Fashion (View Pics).

Khushi might soon make her debut in Bollywood. Her father, producer Boney Kapoor, earlier in an interview with BT had confirmed the same and expressed how he would want someone else to launch her.  He had said, “I have the resources, but I would rather have someone else launch her because I am her father and one tends to get indulgent. You can’t afford to do that as a filmmaker and nor is it good for the actor."

"I would want Khushi to find her own footing. She will be launched by someone I respect and someone I feel secure and safe about," he had added. Stay tuned!

(The above story first appeared on LatestLY on Apr 28, 2021 02:29 PM IST. For more news and updates on politics, world, sports, entertainment and lifestyle, log on to our website latestly.com).