Pari Screamer 6 Video: A Scarily Determined Anushka Sharma Hangs Out Amongst the Dead Bodies in a Morgue 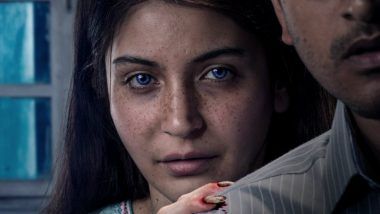 Anushka Sharma has been dropping screamers of Pari, back to back, and each scene is scarier than the previous one. Being a horror flick, it is difficult to reveal all the scenes as it might just take away the crux of the story. However, the Prosit Roy directorial is full of horrific incident, it seems, as they always manage to gain the attention of the fans with new scenes altogether. The makers yet again dropped another teaser that shows an evil Anushka Sharma sitting on the top of a morgue as a dead body just pops out, out of nowhere! Yeah, we get it, a typical horror movie scene, but then all of them are identical to each other anyway, right?

Anushka Sharma will be playing a ghost for the second time. The first time she played a role of a spirit was in her own production ‘Phillauri’. In that movie, she was a love- struck friendly ghost from pre- independence era in India. In her next production after Phillauri, which is of course Pari, she is seen in an entirely different avatar which is actually terrible (in a good way).

Sharma will be seen playing the character of Rukhsana in the film. She is also seen in a double role as of now but what is actually the matter, we will know only after the film is released. There are speculations that Anushka’s character might be suffering from a mental disorder or hallucinations and there is no ghost at all. However, when a horror movie is at the bay, people tend to chalk out various possibilities in advance, so we are not even surprised with this version!

Pari is produced by Clean Slate Films and KriArj Entertainment and stars Parambrata Chatterjee, Ritabhari Chakraborty, Rajat Kapoor and Mansi Multani in the lead. The supernatural flick is scheduled to hit the screens this Holi, March 2, 2018.

(The above story first appeared on LatestLY on Feb 27, 2018 04:51 PM IST. For more news and updates on politics, world, sports, entertainment and lifestyle, log on to our website latestly.com).