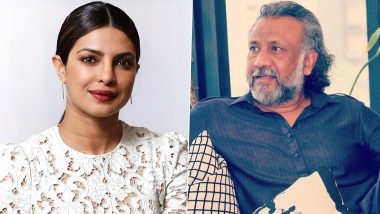 Priyanka Chopra has been an achiever and there's no doubt about it. Be it starting her own production house, Purple Pebble Pictures, marrying the love of her life Nick Jonas to also making a career in singing, she is a confident star and how. Recently, the actress grabbed headlines for signing a multi-million deal with Amazon Studios. The Quantico babe had shared the big news on her social media and expressed how through this she is going to try her best to correct South Asian representation in cinema. As soon as this news was all out, fans, as well as admirers from the fraternity, lauded PeeCee for achieving a landmark deal. Priyanka Chopra Jonas Signs First Look TV Deal With Amazon Studios, Shares The Big News On Social Media!

However, among them, it was Thappad filmmaker Anubhav Sinha who congratulated the actress and also recalled a time when she was called out by a publication for being nobody (non-famous). Sinha wrote, "I am so reminded of a Bombay Time front-page article that wrote her off saying how NO ONE would touch her from a barge pole. Yeah... No one can.' Well, know to be sassy, Priyanka was quick to reply to the director in quite a filmy style. She said, ''Thappad nahi.. kaam se maaro'. Indeed, the conversation is pure gold. Citadel: Priyanka Chopra Jonas and GoT Fame Richard Madden To Star in Russo Brothers’ Amazon Series.

Check Out Priyanka Chopra and Anubhav Sinha's Banter Below:

Not just Sinha, even Dia Mirza raised a toast for Priyanka for grabbing a huge deal. Here's the tweet below:

Priyanka Chopra was last seen in The Sky Is Pink opposite, Farhan Akhtar. Apart from this, she already has two ah-mazing projects lined up with Amazon. One is Sangeet and the other is Anthony and Joe Russo’s spy-series called Citadel. In the series, PeeCee is reportedly starred opposite Richard Madden. Stay tuned!

(The above story first appeared on LatestLY on Jul 02, 2020 11:50 AM IST. For more news and updates on politics, world, sports, entertainment and lifestyle, log on to our website latestly.com).