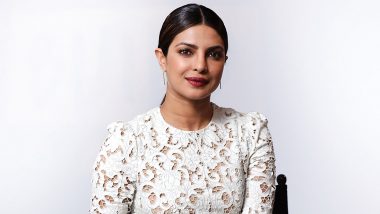 Priyanka Chopra Jonas has been ruling the world with her bright ideas from quite a long time. From being crowned as Miss World 2000, making it big in Hollywood to launching her own single 'In My City', she has never shied away from experimenting. Now, adding one more feather to her hat, PeeCee has signed first-look multi-year multi-million​ dollar deal with Amazon to come up with original content for their OTT service. As per a report in Variety, the desi girl aims to bring South Asian representation to the light on the platform. Priyanka Chopra Jonas Shares A Pic Of Her ‘First Day Out In Two Months’ Wearing a Face Mask.

Remembering the time from her childhood and accepting how she found  the lack South Asian representation on television, Chopra said, "I didn’t think as a 13-year-old when I was watching TV that something was missing, but now as I’m older, I wonder if I would have been a lot more confident in high school if I would have not been afraid of every other person that looked different than me."

"I wonder if I wouldn’t have put my head down and walked in the hallways feeling like a unicorn that everyone was staring at. I wonder if that would have changed my high school experience. I think it would have," she added. Citadel: Priyanka Chopra Jonas and GoT Fame Richard Madden To Star in Russo Brothers’ Amazon Series.

YESSSS @AmazonStudios, LET’S 👏GET 👏 IT!!! So honored and excited to finally share this news with you. ⁣

⁣Looking ahead, we already have so much on our slate! https://t.co/YJCZlxviMd

Priyanka also mentioned how even after being a popular Bollywood face with almost 60 films under her belt, she had to swallow her pride during her initial days to make a mark in the West. "When I got the opportunity to come to America and get representation, I remember the first thing that I had to do was swallow my pride," she admitted.

"I had to explain who I was and what I wanted to do. There have been some incredibly prolific Indian actors that have worked in American movies and have done incredible work — like Irrfan Khan, Tabu, Anupam Kher, Amitabh Bachchan — and outside of Indian Americans like Mindy Kaling and Aziz Ansari, there was no precedent for having someone who was an Indian immigrant from outside of the American culture to come in and break global entertainment," she expressed.

Well, as OTT is the future, we are immensely happy for Priyanka. PeeCee's attempt to showcase some amazing talent and also introduce people from her background into the industry is applaud-worthy, Congrats!

(The above story first appeared on LatestLY on Jul 01, 2020 08:47 AM IST. For more news and updates on politics, world, sports, entertainment and lifestyle, log on to our website latestly.com).