Gully Biy writer, Vijay Maurya is all set for a rocking 2020 as if a report is anything to go by then he is part of Salman Khan-starrer Radhe: Your Most Wanted Bhai. Read on! 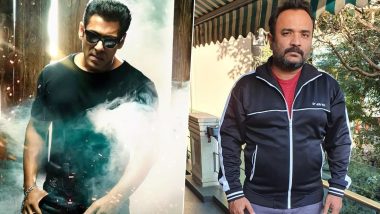 Zoya Akhtar's Gully Boy which starred Ranveer Singh, Alia Bhatt and Siddhant Chaturvedi in key roles went on to become the most loved and awarded film ever, as it received 13 trophies in various categories at Filmfare Awards 2020 which took place in Assam. Everything about this flick was praised, including writer, Vijay Maurya's skills which also made him win Filmfare in the Best Dialogue genre. All that being said now looks like the writer is all set for a rocking 2020 as if a report on Bollywood Hungama is anything to go by then he is part of Salman Khan-starrer Radhe: Your Most Wanted Bhai. Salman Khan's Radhe to Hit the Screens on Eid 2020, Actor Starts Working on Post-Production Amid Coronavirus Outbreak.

Yup, Vijay will be writing dialogues for this Salman movie and trust us it's quite a huge achievement. In an exclusive conversation with the portal, Maurya did not speak much about the collab but hinted stating, “It’s a Salman Khan film and mera jo contribution hai, woh thoda bahut dikhega.” This is indeed big considering he will be now churning some kickass one-liners for the one and only Bhai of Bollywood.

A trade source close to the portal added to the happy news that Vijay's addition to Radhe will add an extra edge to the film. He said, “Vijay Maurya is a reputed and respected artist with a great body of work. If he has written the dialogues of Radhe – Your Most Wanted Bhai, then the film’s buzz definitely increases. With Gully Boy, he has proved how well he understands the Mumbai lingo. Radhe – Your Most Wanted Bhai is also a Mumbai-based film and hence, one can expect the dialogues to be crackling!” Salman Khan To Have No Songs In Radhe Like Amitabh Bachchan In Zanjeer?

Apart from Radhe, the writer also has Farhan Akhtar starrer Toofan for which he will be penning down dialogues. Well, not just a writer, Vijay recently also ventured into acting and was seen in Netflix's, Yeh Ballet. Talking on the same lines, he added, “I am in talks for acting roles. Let’s see. Umar bhi ho rahi hai – heroine ke baap banne ke role ab milenge bahut saare! On a serious note, sab accha hi hoga. Kaafi buzz hai. People automatically remember me and offer me roles.” A multi-talented person for sure!

(The above story first appeared on LatestLY on Mar 27, 2020 01:33 PM IST. For more news and updates on politics, world, sports, entertainment and lifestyle, log on to our website latestly.com).