Radhe: Your Most Wanted Bhai – Salman Khan Planning to Postpone the Action Drama for an Eid 2022 Release

Films like Sooryavanshi, Bunty Aur Babli 2, Chehre have already been postponed and now it looks like Salman Khan too is thinking about shifting the release date of Radhe: Your Most Wanted Bhai. 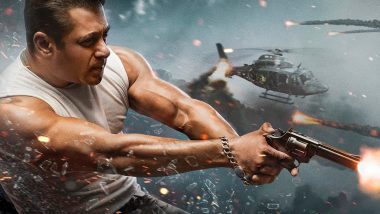 The spread of coronavirus is once again increasing at a rapid rate. The number of cases around the country have risen and seeing the poor conditions in several states, local governments have decided to curb certain activities to control the virus. Theatres and movies releases have once again been affected because of these restrictions. After the lockdown had lifted at the end of 2020, many filmmakers had announced the release date of their films, but with the worsening conditions, they had to postpone their films. Radhe – Your Most Wanted Bhai: Salman Khan Abides by His Eid Release Commitment, Film To Arrive in Theatres on May 13.

Films like Sooryavanshi, Bunty Aur Babli 2, Chehre have already been postponed and now it looks like Salman Khan too is thinking about shifting the release date of Radhe: Your Most Wanted Bhai. The film which is scheduled for an Eid 2021 release on May 13, is now probably going to release next year. Talking about the same, Khan said, “We're still very much trying to release Radhe on this Eid, if the situation settles down otherwise we've to postpone to the next Eid.” The actor was present at the launch event of Kabir Bedi forthcoming memoir titled ‘Stories I Must Tell: The Emotional Life Of An Actor’.

Talking about Bedi at the virtual launch event, Bhai said, “Your personality as a star and human being is pure, so whatever comes out from this book would be straight from your heart and soul. It is going to be a beautiful read and I wish that a lot of people will learn from your experiences shared." While he did not share any more details about Radhe, he urged all his fans to stay safe and to wear a mask. Radhe – Your Most Wanted Bhai: Arjun Kanungo Opens Up on Acting in Salman Khan’s Upcoming Action-Film.

While is it still indefinite if the movie will release on May 13 or not, reports in Bollywood Hungama had earlier suggested that the trailer of Radhe: Your Most Wanted Bhai will be out in the first week of April. “The trailer of the film is expected to release in the first week of April. The first look, which was launched exactly two months before the film’s release, on March 13, got a great response. The makers are confident that the trailer would considerably enhance the buzz of the film," a source told the portal. This Salman Khan thriller releases in cinemas on May 13 and also stars Disha Patani, Jackie Shroff and Randeep Hooda in key roles.

(The above story first appeared on LatestLY on Apr 08, 2021 11:20 AM IST. For more news and updates on politics, world, sports, entertainment and lifestyle, log on to our website latestly.com).