Randhir Kapoor Birthday Special: Five Songs Of The Actor That Are Part of Everyone's Playlist

On Randhir Kapoor's birthday today, let's listen to five of his songs that are our all-time favourites. 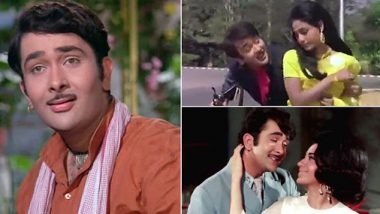 Randhir Kapoor's birthday special piece should start with a fun fact that many of today's generation isn't aware of. Raj Kapoor's eldest son made his acting debut with Kal Aaj Aur Kal in 1971 which was also his directorial debut. Perhaps he was one of the firsts to do the same. The film had his grandfather Prithviraj Kapoor, father Raj Kapoor and himself representing three generations. He starred opposite his wife Babita in this film. So Kal Aaj Aur Kal is pretty momentous for him and also the industry. Kareena, Saif Ali Khan and Taimur Join Karisma, Randhir Kapoor For a Perfect Family Portrait!

While Randhir had a bit of an on and off career, the music of his movies has always been superhits. Much credit also goes to the golden pair of R D Burman and Kishore Kumar for creating such magic. But you have to give it to Randhir Kapoor that he was lucky enough to be part of some of the melodious musical gems of that era. Why do we say so? Check out this list and you will know.

Everything about this song is nice, soothing and pure. A confession song between two people who are aware of the romantic tension between them but never manage to say it. What a beautiful composition!

It's one of the most romantic songs we have ever heard. It's a song of lost and found and the love thereof... what a melody! To be honest, all the songs of this film are simply amazing including the title track.

Although it has Amitabh Bachchan and Rakhee in it, this will always be a Randhir Kapoor song as he played the most adorable younger brother here.

A deeply romantic track from the film is everybody's favourite. An ode for Mr Right or Miss Right you keep your hearts for. You can actually see how good Randhir and Babita looked together.

That's one song that may not be a favourite of many but is still loved by all. A drunk Randhir Kapoor dances with the very beautiful Neetu Singh.

Which among these is your favourite Randhir Kapoor song? Our all-time favourites are Gum hai kisi ke pyar mei and Jaane ja.

(The above story first appeared on LatestLY on Feb 15, 2020 08:30 AM IST. For more news and updates on politics, world, sports, entertainment and lifestyle, log on to our website latestly.com).