RIP Rajiv Kapoor: Neetu Kapoor Confirms 'No Chautha' To Be Held for the Late Actor Due to Safety Reasons Amid Pandemic

In a shocking turn of events, Bollywood actor, Rajiv Kapoor breathed his last on Tuesday (Feb 9) due to cardiac arrest. He was 58. Now, a day after, the deceased's sister-in-law, Neetu Kapoor has confirmed that no chautha will be held of the late actor. Read on. 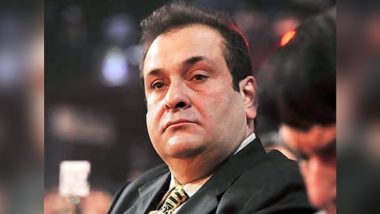 In a shocking turn of events, Bollywood actor, Rajiv Kapoor breathed his last on Tuesday (Feb 9) after suffering from cardiac arrest. He was 58. "He passed away about 1.30 pm due to heart attack," brother Randhir Kapoor had said in a statement. The deceased was also cremated on the same day and many Bollywood actors like Shah Rukh Khan, Sonali Bendre, Ali Bhatt and others paid their last tribute to the late actor. Now, sister-in-law, Neetu Kapoor took to her Instagram and confirmed that there will be no chautha happening for Rajiv Kapoor, due to safety reasons. Rajiv Kapoor Dies At 58; Neetu Kapoor Confirms His Tragic Demise on Instagram.

Considering that a lot of celebrities might make their presence felt at late actor Rajiv Kapoor's prayer meet, the Kapoor's have decided to give the chautha a miss due to COVID-19 pandemic. "Due to the current pandemic circumstances, there will be no Chautha held for the Late Mr. Rajiv Kapoor for safety reasons. May his soul rest in peace. The entire Raj Kapoor family is a part of your grief too," he post read. Rajiv Kapoor Dies At 58: From Ram Teri Ganga Maili To Hum To Chale Pardes, Here’s Looking At Some Of His Popular Films.

Rajiv Kapoor was one of the finest actors during his time and was popularly known for his role in Ram Teri Ganga Maili (1985). While he made his acting debut in Ek Jaan Hain Hum (1983), he had made his directorial debut with the Prem Granth (1996) which starred his brother Rishi Kapoor and Madhuri Dixit. May his soul rest in peace.

(The above story first appeared on LatestLY on Feb 10, 2021 12:49 PM IST. For more news and updates on politics, world, sports, entertainment and lifestyle, log on to our website latestly.com).