Rajiv Kapoor Dies At 58: From Ram Teri Ganga Maili To Hum To Chale Pardes, Here’s Looking At Some Of His Popular Films

Rajiv Kapoor was one of the finest actors of Hindi Cinema. He has done some brilliant roles over the years and won hearts with his performances. 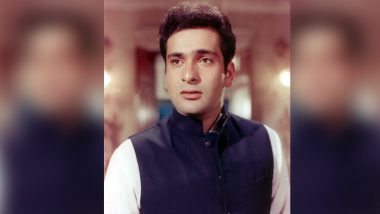 Rajiv Kapoor, the veteran actor of Hindi Cinema, died on February 9. The news of his untimely demise has been confirmed by Neetu Kapoor on social media. The actor reportedly suffered from a massive cardiac arrest and he was rushed to the nearby hospital by Randhir Kapoor, reports TOI. He was declared dead on arrival. Randhir Kapoor was quoted as saying, “I have lost my youngest brother, Rajiv. He is no more. The doctors tried their best but could not save him.” Neetu Kapoor Confirms Rajiv Kapoor Passes Away At 58.

Rajiv Kapoor was one of the finest actors of Hindi Cinema. He has done some brilliant roles over the years and won hearts with his performances. Ram Teri Ganga Maili, Hum To Chale Pardes are some of his popular films. For the unversed, Rajiv had also made his directorial debut with Prem Granth that had featured Rishi Kapoor as well, who passed away in April last year. Let’s take a look at some of his iconic films.

Ram Teri Ganga Maili – The romantic drama that featured Rajiv Kapoor and Mandakini in the lead was helmed by the former’s father Raj Kapoor, which also happened to be his last directorial venture. This 1985 released film is included in ‘all-time blockbusters’ list of Indian Cinema.

Lover Boy – Rajiv Kapoor had essayed dual roles in this Shomu Mukherjee directorial, Kishan and Kanhaiya. Meenakshi Seshadri and Anita Raj were the leading ladies in this film.

Rajiv Kapoor was set to make a comeback with the film Toolsidas Junior, helmed by Ashutosh Gowariker. We express our heartfelt condolences to all near and dear ones. RIP, Rajiv Kapoor.

(The above story first appeared on LatestLY on Feb 09, 2021 02:17 PM IST. For more news and updates on politics, world, sports, entertainment and lifestyle, log on to our website latestly.com).