Salman Khan's Chulbul Pandey Gets an Interesting Twist in Dabangg 3 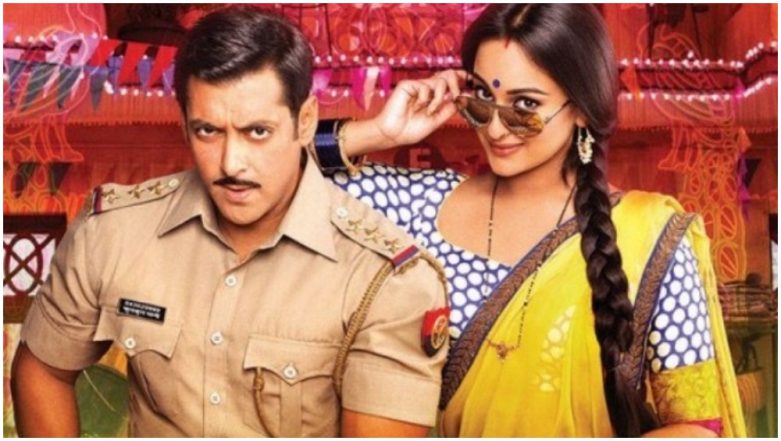 Salman Khan's upcoming film with Katrina Kaif, Bharat, has not even released yet and the fans are already excited about Dabangg 3! The franchise that also stars Sonakshi Sinha has been getting a humongous response from the fans and they just cannot get over the fiery yet loveable cop, Chulbul Pandey. Now, the third installment of this Prabhudheva directorial will get a twist as Chulbul will be seen as a goon! Avengers: Endgame Director Joe Russo is a Huge Fan of Salman Khan’s Dabangg Franchise.

All these days, his stylish aura as the police who sings, dances and romances his wife was enough for the admirers to go to the theatres. However, in this latest film, he will be seen as a goon who turned into a cop later in life. Basically, the flick will have an interesting back-story of Chulbul Pandey.

Meanwhile, the makers are all set to make this installment, grander than your imagination. There are 500 back up dancers roped in to perform on the title track of the film. So if you are an ardent fan of "hud hud dabangg", here's something you might want to wait to release, the most. Also, the shooting of the title track is scattered over 13 long days, naturally making it larger than life.

Speaking of dance, did you know that bhai might rope in choreographer, Saroj Khan for the songs of the film? In a chat with Mid-day, she said, "When we met, Salman asked me what I was doing nowadays. So I told him honestly that I don't have any work [film offers], and that I am teaching Indian classical dance to young actresses. Upon hearing that, he said, 'Now, you will work with me'." Well, the project is just getting bigger and bigger with each announcement. Are you ready for Salman Khan's Robin Hood avatar yet?