Shah Rukh Khan in Davos: Recreates His Romantic Moment From the 90s at Swiss Alps

Shah Rukh Khan received an award for leadership in championing children's and women's rights in India. 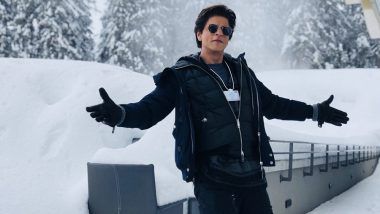 Superstar Shah Rukh Khan is best at being himself. Remember him in the snowy mountains spreading his arms, striking his signature pose, expressing romance that still makes the fans go crazy? Well, Shah Rukh just relived that very moment while he was in Switzerland at the World Economic Forum in Davos. The Bollywood Badshah received an honour of a Crystal Award the forum and took some time to indulge in the beauty of the Swiss Alps before he headed there.

Giving his fans the sheer delight of the 90s, the actor posted a picture of himself on his twitter. He is seen wearing a couple of jackets, gloves and sports glares as well, looking handsome as always while bracing the icy weather. He struck his famous pose and captioned it "Switzerland main aake yeh na kiya toh kya kiya...?" Well, there’s no denying that! Parts of Shah Rukh’s hit film Dilwale Dulhania Le Jayenge were shot in some parts of Switzerland. This picture of Shah Rukh was a good throwback to get us there. It wouldn’t be wrong to say Shah Rukh made the most of his trip to the snowy Alps town and definitely gave his fans a good nostalgia.

Shah Rukh Khan received an award for leadership in championing children's and women's rights in India. Along with him were English singer Sir Elton John and Australian actress Cate Blanchett who were also honoured at this event and Shah Rukh couldn’t be happier. It was a fan moment for the Bollywood star too.

Honoured to receive the @wef’s 24th Crystal Award, together with @eltonofficial and Cate Blanchett. My fan moment!!

Watch the #crystalawards via https://t.co/rILPgHRgtL at the #wef18 meeting in Davos.

Known for his profound words and inspiring actions, the actor gave a very nice speech at the ceremony. He thanked his late mother, wife and his daughter for their support in his work. He has done a lot of charitable work for victims of acid attacks. "We, the powerful, need to get out of the way, to pick the barriers apart, the ones that give us names and races and colours and hierarchies," he said. "That is what I have learned from my beautifully scarred women," he added, referring to the acid victims. Shah Rukh’s speech was equally lauded at the meet.

(The above story first appeared on LatestLY on Jan 23, 2018 12:07 PM IST. For more news and updates on politics, world, sports, entertainment and lifestyle, log on to our website latestly.com).