The powerful personalities, Shah Rukh Khan and Amazon CEO, Jeff Bezos recently met at an event in Mumbai during Bezos' India visit and it was an exchange worth listening to. 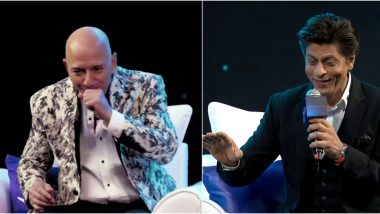 It's 2020 and Shah Rukh Khan is yet to announce his next project ever since his last 2018 release, Zero. Even as multiple projects with A-list directors not just from Bollywood but also South are being speculated, there hasn't been any confirmation as yet. Poking fun at his last film's poor performance and how it has changed his behaviour, Shah Rukh Khan recently left Amazon CEO, Jeff Bezos laughing. The powerful personalities recently met at an event in Mumbai during Bezos' India visit and it was an exchange worth listening. Shah Rukh Khan Meets Amazon CEO Jeff Bezos During his India Visit and Teaches him his Iconic Don Dialogue (Watch Video).

Bezos was on stage with SRK and Zoya Akhtar, when he said, "I was talking to them backstage and he's one of the most humble people I have ever met." Well, that statement surely left the audiences cheering for the superstar but his response to that nearly had Bezos choking on the sip of water he was having as he cracked up. In the video, we see Shah Rukh saying, "It's only because my last few films haven't done well" after which Bezos can't seem to control his laughter. Jeff Bezos Celebrates Makar Sankranti by Flying Kite With Children in India (Watch Video).

Lots of fun on stage with @iamsrk and Zoya Akhtar. pic.twitter.com/wdZ2tEsySX

Sharing the video of their interaction on Twitter, Bezos himself wrote, "Lots of fun on stage with @iamsrk and Zoya Akhtar." After SRK's hilarious comment, the camera pans to the audience and we can see Farhan Akhtar and Shibani Dandekar also cracking up at SRK's joke. Well, this is not the first time Shah Rukh made everyone laugh with his witty statements, he recently also left American talk show host David Letterman stumped with his sassy statements on his Netflix show, My Next Guest Needs No Introduction.

(The above story first appeared on LatestLY on Jan 18, 2020 10:22 AM IST. For more news and updates on politics, world, sports, entertainment and lifestyle, log on to our website latestly.com).