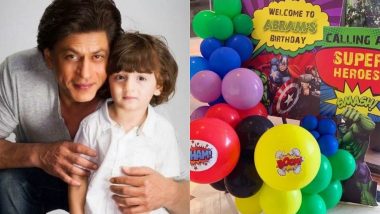 Shah Rukh Khan's youngest son, AbRam turned six yesterday (May 27) and guess what? The little one threw a Marvel themed party for his friends. Pictures of the decor have made way to social media and they speak volumes on the lavishness of AbRam's birthday party. Black and red balloons, standees with pictures of Marvel Cinematic Universe (MCU) superheroes along with big cutouts of Hulk, Spider-Man, Thor and others made for the decor of the party.

Check out the pictures that were shared by SRK's fanclub on Twitter right here:

The caricature studio, slime making, photobooth, games and so much more 🥳 Here are some more pictures from the birthday party of Abram. pic.twitter.com/ZMpEpTMsWe

As seen in the pictures, there was a caricature making studio, bungee jumping and slime making booth at the party, which took place at Taj Lands End, very close to SRK's house, Mannat. AbRam Khan Birthday Special: Cute Pictures of Mini Shah Rukh Khan That Will Melt Your Heart!

AbRam is the third child of Shah Rukh and his wife Gauri Khan after Aryan and Suhana. Shah Rukh always keeps talking about his kids, especially AbRam in his interviews to the media. In one of the interviews some months back, SRK said, “Aryan always wanted to be on his own and Suhana is a little shy. But AbRam is a very outgoing and a happy kind of kid. In the house, he does seem more attracted to me than anyone else. I think he likes me a lot. I play a lot with AbRam and I am a little stupid with him, so he really enjoys it. I’ve played the same games with Aryan and Suhana, but AbRam enjoys them more. Out of the three kids, somehow he has more chances and time to be with me because when my kids were growing up, they had different personalities.”

In another interview, Shah Rukh had revealed how AbRam loves to be around him. “I think he loves being around me. On my birthdays, he would just come out to the balcony every hour. The fans keep screaming my name and he comes running to me and says, ‘Papa, peoples have come. Let’s go meet them’. He calls them ‘peoples’ and then, he drags me out because he enjoys waving out to them. He’s a smart, intelligent kid and extremely fun to be with. And with him, I become a kid myself,” he was quoted.

How did you like the pictures? Let us know by tweeting to us @LatestLY.

(The above story first appeared on LatestLY on May 29, 2019 04:53 AM IST. For more news and updates on politics, world, sports, entertainment and lifestyle, log on to our website latestly.com).