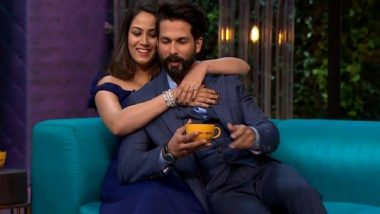 Hear the big announcement we all were waiting for! Shahid Kapoor and Mira Rajput who were blessed with a baby boy on September 5, didn't make fans wait too long to know his name. The Batti Gul Meter Chalu actor took to his Twitter account to announce his son's name as Zain Kapoor and that's quite a fancy one. We remember the time when Misha was born, her proud parents made us wait for too long to hear her name. While many of the actor's fans speculated if it could be Misha or Shamira, the former one was revealed finally. An Elated Shahid Kapoor Takes Misha to Meet Baby Brother and Mommy Mira Rajput - See Pics

Zain Kapoor is here and we feel complete. Thank you for all the wishes and blessings. We are overjoyed and so grateful. Love to all. ❤️🙏

We wonder how's Misha welcoming her darling little brother, Zain. The little munchkin who recently turned 2 was clicked in her daddy's arms as they visited Mira and little Zain in the hospital yesterday. We also gather that after a complicated first pregnancy, the arrival of the second baby was not easy for Mira. There were many calls in Kapoor's household and the phone just refused to stop ringing. It was Mira's mother who was quickly summoned to the hospital as Mira had to be operated upon. She apparently underwent a C-section to deliver her baby boy!

(The above story first appeared on LatestLY on Sep 07, 2018 03:57 PM IST. For more news and updates on politics, world, sports, entertainment and lifestyle, log on to our website latestly.com).