Shatrughan Sinha Birthday: Did You Know The Actor Appeared In An NBC TV Series In 1968?

There are a few appearances of Shatrughan Sinha that went uncredited but today, we will talk about his presence in an NBC series that hardly anyone knows about. We are talking about Maya. Thank you, IMDb! 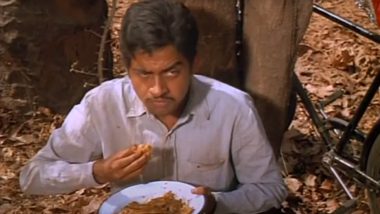 Shatrughan Sinha is one of the most unique actors who had one of the most unique careers. He started as a villain. It is said, he was so convincing as the baddie that his entry scene in movies would get a rousing cheer at the theatres. Be it Khilona, Blackmail or Mumbai To Goa, Sinha's brand of villainy was cunning, manipulative and unapologetic. But tides turned and he soon became a successful hero which was cemented further by the release of Kalicharan. But this FTII graduate did a few roles in certain series or movies that many wouldn't be aware of. There were a few appearances of his that went uncredited but today, we will talk about his appearance in an American show that hardly anyone knows about. Thank you, IMDb! Shatrughan Sinha Birthday Special: 10 Dialogues of Shotgun Sinha That Will Make You Go ‘Khamosh!’ With Their Badassery!.

Shatrughan Sinha played important characters in NBC's Maya. It was an American adventure show which aired on the network on Saturdays and ran from 1967 to 1968. Sinha played Desai and Khandur, Leader of the Shinwaris. In the following video, scroll down to 11:50 and see for yourself! You will be shocked! Shatrughan Sinha Jokes By Calling Himself Fortunate Since His Name Didn't Come Out in the #MeToo Movement.

Maya talked about an American teenager who landed in India to unite with his father, only to find him missing. He goes on a search and befriends an Indian boy and his pet elephant Maya. They help him in his find. You can watch the episodes on YouTube.

(The above story first appeared on LatestLY on Dec 09, 2021 08:20 AM IST. For more news and updates on politics, world, sports, entertainment and lifestyle, log on to our website latestly.com).