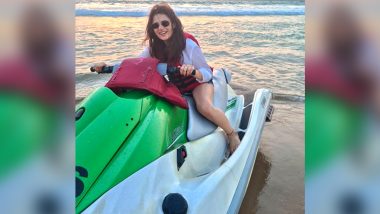 Mumbai, Nov 16: Radhika Madan has been consistently impressing with her roles lately, and she says she will leave no stone unturned in her bid to prove her mettle as a versatile artiste. The young actress scored as Irrfan Khan's daughter in Angrezi Medium earlier this year, after her performance in her debut film Patakha (2018) won her many fans. Shiddat: Diana Penty, Mohit Raina’s Movie Is an Intense Love Story!

Speaking to IANS, Radhika opened up about her upcoming projects and the roles she would like to do in future. "I want to do roles I haven't done before. I don't like to play the same character again and again. It's very important for an actor to play different roles and takes different challenges," she said. The actress claims novelty of character is a reason she is excited about her next release, Shiddat.

"In my upcoming film Shiddat, I am essaying the role of a swimmer. Honestly, I didn't know swimming before signing the project. I learnt it now. It took me four to five months to learn swimming. I want to play different roles. I don't want audience to put me in a box," she said.

(The above story first appeared on LatestLY on Nov 16, 2020 11:54 AM IST. For more news and updates on politics, world, sports, entertainment and lifestyle, log on to our website latestly.com).