Sonakshi Sinha celebrates her birthday today and we have just the thing to talk about. Sinha in her initial years was one of the biggest box office earners among the actresses of her generation. In 2012, she had four releases, out of which three were Rs 100 crore blockbusters. 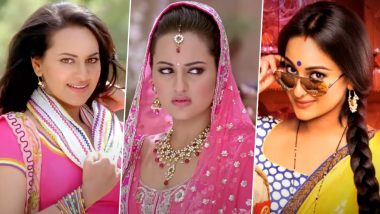 Sonakshi Sinha celebrates her birthday today. This talented actress has been an inspiration for every newcomer star kid since her debut with Dabangg in 2010. She made the right movie choices of being a popular star before showing off her skills as a phenomenal actress in Akira. She chose to be the heroine of heavily male-centric movies like Rowdy Rathore, Holiday, Dabangg 2 and others in her initial days. While many would consider that an easy way to be famous, we think it was a masterstroke. Sonakshi Sinha Shares Photo of Getting the COVID-19 Vaccine Shot, Says ‘Vaccine Manjhe Victory’

The reason being if you observe her roles in these movies, they weren't the regular petite, coy, or shy girls but brave and flamboyant ones. That's a refreshing change from what we see in such male-dominated movies where the girls don't have much to add to the narrative. In that context, Sonakshi did manage to stand out in such movies. That also helped her immensely to make a footing at the box office. In fact, in 2012, she had four releases; out of which four of them were Rs 100 crore earning films. Sonakshi Sinha: As Celebrities, I Feel We Can Make a Difference Because We Have a Voice

Let's check them out

Rowdy Rathore starring Akshay Kumar in the leading role alongside Sinha, was a remake of the Telugu film Vikramakudu. The movie does have quite a lot of cringe scenes, it however shows Sonakshi in a very strong role.

Another remake and yet another Rs 100 crore film for Sonakshi. The film is based on the Telugu movie Maryada Ramanna and starred Ajay Devgn and Sanjay Dutt alongside her. Her character wears her heart on her sleeves and we definitely love that. That scene where she rides a bike like a boss...our favourite!

This is Sonakshi's home turf and it was only obvious for the Salman Khan film to earn more with its sequel. Sonakshi reprised her roles of the feisty Rajjo who supports Chulbul Panday every step of the way.

(The above story first appeared on LatestLY on Jun 02, 2021 08:20 AM IST. For more news and updates on politics, world, sports, entertainment and lifestyle, log on to our website latestly.com).