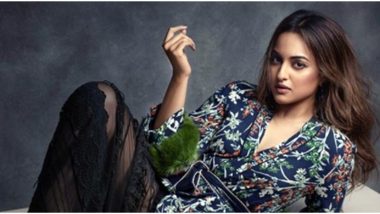 Sonakshi Sinha has been in the news for quite some time now. Since the nepotism row resurfaced post Sushant Singh Rajput's death, the actress has been facing harsh trolling on social media. She soon quit Twitter and also disabled her Instagram comments section. Now, as she became the cover girl of Cosmopolitan India Magazine's 'Self Love' issue, she talked about trolling, body shaming, losing weight and more. Sonakshi Sinha Poses For Cosmopolitan India Magazine In a Sexy Black Dress and Offers a Strong Dose of Self-Love! (View Pic).

In her chat with the publication, she talked about how even losing 30 kgs did not stop trolls from body shaming her. She also described her approach towards them then onwards.

The magazine quoted her saying, "It was a huge achievement for me. And I was so proud of myself. But people were still talking about how much I weighed and how I looked! Eventually, I told myself that I wouldn’t let them bring me down because they had no idea what I had been through, how hard I had worked to get here. And, in the end, it really didn’t matter what they thought. They were not the ones in a big-ticket Bollywood film, I was!." Sonakshi Sinha Sends Out A Strong Message On Body Positivity As She Turns Cover Girl For Cosmopolitan’s Latest Issue (View Pic).

Sonakshi's Video On Self Love

Lets not believe every lie that is said to us... instead lets believe in ourselves. Here’s a little something ive recited for @cosmoindia’s Self Love issue. Hope it resonates with you. Oh and ... you’re beautiful just the way you are ❤️

Sonakshi not just sent out a positive message but also posed for the magazine looking extremely sexy. She chose a black slit dress as well as a white shirt look in two different pictures. Well, Sona knows perfectly well how to not get drained with the constant negativity!

(The above story first appeared on LatestLY on Jul 05, 2020 07:52 PM IST. For more news and updates on politics, world, sports, entertainment and lifestyle, log on to our website latestly.com).