Sui Dhaaga – Made in India: Anushka Sharma Has a Kickass Reply to All the Viral ‘Mamta’ Memes on Social Media 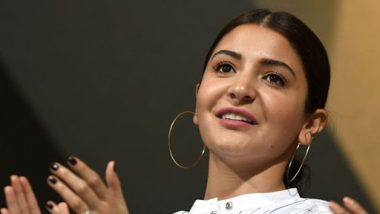 Varun Dhawan and Anushka Sharma starrer Sui Dhaaga – Made in India is one of the much-anticipated films of the year. Helmed by Dum Laga Ke Haisha’s Sharat Katariya, Sui Dhaga is a story of pride and self-reliance, rooted in the heart of India. Recently, the makers of Sui Dhaaga dropped the trailer of the film. While the trailer received a great response, a scene from the trailer, where the 'Pari' actor can be seen crying, became viral memes on the social media.

Making funny memes and hilarious jokes around her stills from the movie, several Twitter users captioned the scene, depicting different situations. Not just that, co-star Varun Dhawan too pulled the actress' leg by calling her- ‘Memes Ki Rani’. When the memes traveled its way to the actress, it left her in splits. Yes, you read that right. The actress, in fact, has been busy sharing the memes with Varun and friends.

In a statement to Mid-Day, Anushka said, "I thought the memes were hilarious. I kept sharing them with Varun, Sharat [Katariya, director] and my friends. It is a compliment that my character has been stuck in people's head after they watched the trailer. Mamta has become a figure that everyone identifies with. Memes have become a common feature today. People actually dedicate time to make them. But in our case, it happened naturally and that too, on a huge scale."

Here are few of the many memes that went viral on social media.

Sui Dhaaga – Made in India is all set to release on September 28 this year, just before Gandhi Jayanti. Talking about the actors, Varun and Anushka, who have wrapped up for their upcoming film Sui Dhaaga – Made in India, will be seen on screen together for the very first time in their long career of acting. The duo is playing the role of a small town couple – Mauji, a tailor (Varun) and Mamta, an embroider (Anushka). Also, the film brings together National Award winning producer-director combo of Maneesh Sharma and Sharat Katariya after their blockbuster Dum Laga Ke Haisha.

Varun - Anushka starrer is a special salute to the inherent entrepreneurial spirit that the youth of India and our local artisans have. On the professional front, Anushka will soon be seen alongside Shah Rukh Khan and Katrina Kaif in Aanand L Rai’s Zero, which is slated to release on December 21, 2018. Meanwhile, Varun, who was last seen in Shoojit Sircar’s October, will soon start prepping for Remo D’Souza’s dance film alongside Katrina Kaif, which will hit the screens on November 9, 2019. Watch this space for further updates.

(The above story first appeared on LatestLY on Sep 05, 2018 01:47 PM IST. For more news and updates on politics, world, sports, entertainment and lifestyle, log on to our website latestly.com).