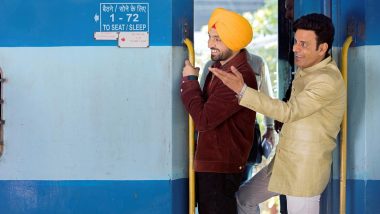 Actors Diljit Dosanjh and Manoj Bajpayee recently shot at a crowded Chhatrapati Shivaji Maharaj Terminus (CSMT) platform here for their upcoming film Suraj Pe Mangal Bhari. The cast and crew of Abhishek Sharma's upcoming family comedy shot outside the crowded station. They also shot the pre-climax sequence on platform number 10. According to a source, there was a huge crowd gathered outside the station when they got to know the film's team was going to shoot there. "While we had about 150 junior artistes inside to shoot the sequence on the platform, the crowd gathered to get a glimpse of the actors," added the source. Ranbir Kapoor to Star in Legendary Singer Kishore Kumar Biopic, Confirms Anurag Basu.

Sharma shared: "There's a pre-climax scene in the film that required a railway station. Usually, filmmakers like to shoot in a controlled environment, perhaps on a created set, but it felt inauthentic." "The film is set in the '90s and Victoria Terminus was just the perfect place to shoot. We took necessary permissions from the Central Railways for the shoot who were extremely forthcoming and helpful. This was more expensive, but the venue lends itself to a better atmospheric experience in the scene. The engine drivers were so precise and professional. We shot for two days from 7 a.m. to 7 p.m." Lord Curzon Ki Haveli: Rasika Dugal to Star in Anshuman Jha’s Directorial Debut.

He also said the team was excited like kids. "We took turns to check out the engine and honk the train's horn. We set camp close by at the parking area but during our break, we sat and ate our meals inside the train compartment because going to vanities was taking 15-20 minutes," said the director. From setting up a massive set in Film City recreating chawls of Mumbai to exquisite, old libraries, the film, which is a Zee Studios production, is being shot entirely in Mumbai.

"We are shooting primarily in South Mumbai. I was particular that my crew doesn't violate any rules or cross railway lines. Before we got to shoot, I had an elaborate meeting with them telling them to keep guidelines in mind. We kept a vigilant eye and I told my crew that I would fire anyone who crossed the railway tracks or cause disturbance to travellers and passengers," said the director.

(The above story first appeared on LatestLY on Feb 07, 2020 04:21 PM IST. For more news and updates on politics, world, sports, entertainment and lifestyle, log on to our website latestly.com).