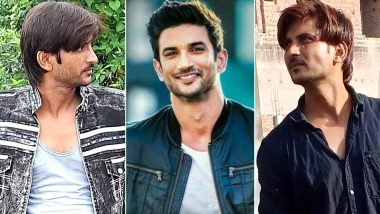 Dil Bechara actor Sushant Singh Rajput's death news on June 14, 2020, numbed the whole nation. As the actor was just 34 and died by suicide at his Mumbai residence. Soon after his demise, fans, as well as his fraternity friends, mourned the loss of a talented gem. Not just this, many fan pages of the late actor are still on throwback video and picture sharing spree which highlights the good times spent by Sushant. Amid this, a man named Sachin Tiwari is creating a storm on social media for being a lookalike of Sushant. A few videos and pics of Tiwari has gone viral and must say that the resemblance is real. Sushant Singh Rajput Death Investigation: Police Ask Twitter India For Source Of Late Actor's Allegedly 'Deleted' Tweets On June 14 (Details Inside).

Right from the jawline to the hairstyle, Sachin does look a lot like Sushant from his initial days in Bollywood. Reportedly, the man hails from Uttar Pradesh and is a fitness freak. Talking about his Facebook page, he has currently 155 followers on the same. "I am lucky to have a glimpse of Sushant Sing Rajput sir in me. I will never let you vanished, you will always alive in our heart," his FB's 'about' section reads. Sushant Singh Rajput's Viral and Now Deleted Tweets Hours Before his Suicide are Fake, Clarifies Twitter.

Dancing on the title track of Shuddh Desi Romance which starred Sushant.

Here's a close up look.

Here's a glimpse from the side angle and well Sachin does look similar to Sushant. Watch!

What's your take, Sachin Tiwari? Meanwhile, Sushant Singh Rajput's last film on the celluloid is going to be Mukesh Chhabra directorial, Dil Bechara. Debutante Sanjana Sanghi is the female lead in the flick. For the unversed, due to the pandemic, the late actor's last movie is set for an OTT release on Disney Plus Hotstar. It's slated to go all digital on July 24. Stay tuned.

(The above story first appeared on LatestLY on Jul 08, 2020 04:46 PM IST. For more news and updates on politics, world, sports, entertainment and lifestyle, log on to our website latestly.com).