The Bandra Police has requested Twitter India to submit any available information on the source of Sushant Singh Rajput's alleged tweets on the early morning of June 14, when he died by suicide 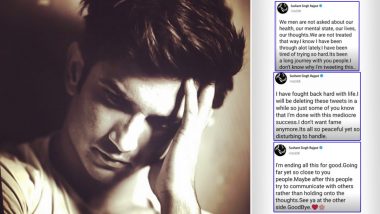 Actor Sushant Singh Rajput's suicide shook the Bollywood industry to no end. Right from depression being the real reason for the actor ending his life to him being forced to take his life after being cornered, ignored and alienated by the industry, a lot too many people have had their fair share of 2 minutes of fame by talking and discussing the actor's death. Meanwhile, the Bandra police have been investigating the actor's death from every angle possible after numerous conspiracy theories were floated on social media. Sushant Singh Rajput's Viral and Now Deleted Tweets Hours Before his Suicide are Fake, Clarifies Twitter.

And in the latest bit of their investigation, the Bandra Police has requested Twitter India to submit any available information on the source of Sushant Singh Rajput's alleged tweets on the early morning of June 14, when he died by suicide, reads a report in TOI. Dil Bechara Trailer: 'Ye Kahaani Adhoori Hai' Say Netizens as They Miss and Fondly Remember Sushant Singh Rajput (View Tweets).

The investigation into Rajput's death has led to the questioning of close to 30-40 people right from his alleged girlfriend Rhea Chakraborty to filmmakers the actor worked with and even those filmmakers who were supposed to work with him but the deals fell through.

For those who are clueless, here goes- After SSR's death, three tweets of Sushant had surfaced where the actor clearly hinted at being depressed because of 'mediocre success' and that he was done with 'this'. In one of the tweets, the actor had allegedly written 'See ya at the other side. Goodbye'. Kriti Sanon Calls Out Blind Items, Social Media's Toxicity and Media Coverage Of Funerals After Sushant Singh Rajput's Death (Read Tweets).

Check Out The Said Tweets Below:

All the tweets from @itsSSR’s Twitter before his death are fake & fabricated - @TwitterIndia has clarified on the same, kindly don’t believe in these tweets and don’t pass it further...Let him please rest in peace! Please, I beg! 🙏🏻 pic.twitter.com/w6pjNEkyFd

And we say allegedly because Sushant's twitter had been dormant since December 2019 as he was not active on the micro-blogging site. Also, various debates took place online that stated that these tweets might not be authentic. Sushmita Sen Pens a Heartfelt Post On Sushant Singh Rajput, Says Would Have Loved to Share Mysteries Of The 'Universe' From One Sush To Another.

Sushant Singh Rajput died by suicide on June 14 at his Bandra residence. His house help saw his body hanging to the ceiling and alerted cops and Sushant's family. His death came as a huge shock not just to the industry but also to the entire world and his fans still morn him. He was laid to rest at Vile Parle's Pawan Hans crematorium on June 15 and his ashes were immersed in Ganga on June 17 by his father and his sisters.

(The above story first appeared on LatestLY on Jul 08, 2020 12:54 PM IST. For more news and updates on politics, world, sports, entertainment and lifestyle, log on to our website latestly.com).