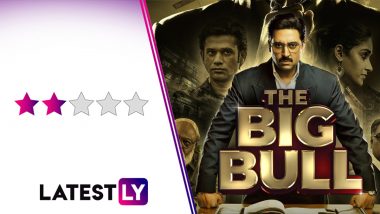 The Big Bull Movie Review: After watching The Big Bull, to be streaming on Disney+ Hotstar, I wonder if the timing was all wrong for the movie. The Big Bull comes mere weeks after Hansal Mehta's explosive Scam 1992 series - both based around the Harshad Mehta scandal - with the latter receiving critical acclaim and popularity. Comparisons would be drawn between the two, which is unfair to The Big Bull. For Scam 1992 was a web-series that allowed it to have room for its characters and plotlines to breathe, while The Big Bull has to condense all in a two-and-a-half hour runtime. The Big Bull Movie: Review, Cast, Plot, Trailer, Streaming Date And Time Of Abhishek Bachchan’s Film.

Of course, the bigger question is - did I not fawn over The Big Bull because I have watched Scam 1992 or is it because it is just an average retelling of an infamous scandal? While I am unfortunately subjugated by the research-built storytelling of Hansal Mehta and Prateik Gandhi's powerful performance, I want to believe my non-adoration for The Big Bull has less to do about the comparison, and more to do in how mechanical the film felt from the start to the end.

The Big Bull is more of a fictional retelling, that changes real-life people's names and some of the events, but uses the real-life scandal to carve its narrative's path. So Harshad Mehta becomes Hemant Shah (Abhishek A Bachchan), an accountant turned stockbroker in the late '80s, whose biggest scam would be how he loses and gains his Gujrati twang as per the film's convenience.

So Hemant, who lives in a rented room in a chawl with his mother (Supriya Pathak, wasted) and brother Viren (Sohum Shah), is beleaguered with his present life and sees the stock-trading as a way to get into the riches. His ambition is also accentuated by the fact that he is in love with Priya (Nikita Dutta), his neighbour, whose father wants her to marry someone who own a flat and a car.

By manipulating stock prices by using loopholes in trade and banking system, Hemant sees himself scaling heights, earning admirers and associates as well as more enemies. There is also Meera Rao (Ileana D'Cruz), a fiery financial journalist (modelled after real-life journalist Sucheta Dalal), who is determined to expose Hemant's secret formula. However, Hemant's biggest enemy is his own ruthless ambition, as he sees his dream of becoming India's first billionaire go kaput with a series of exposes.

The Big Bull is directed by Kookie Gulati, whose last feature film attempt was trying to save Vivek Oberoi's flailing career with Prince (you know the one with the Atif Aslam song that kept blaring on your television screens every five minutes). The director himself has written the story for The Big Bull, along with Arjun Dhawan. Abhishek Bachchan’s Twitter Profile Picture Reveals an Interesting Story Behind His Flop Mani Ratnam Film, Raavan.

What they did with The Big Bull is take a very interesting chapter in India's rise to being a global power, put more sheen in it while going lax on the detailing. Like, Hemant's rise to the top feels so easy and rushed, from receiving a random tip that piques his interest in trading, to opening an office, to finding easy access to banking loopholes. His rags-to-riches saga seeks motivation in a love story, rather than the character's own desire to do so, because you know, it's Bollywood - Love has something to do with every shite! I understand that the character of Priya serves more as a sounding board for Hemant to voice his accession plans than anything else. It is another matter when Hemant breaks bad, Priya is kept to the sidelines and only arrives when the movie needs to show him in a more sympathetic light.

What the makers are more invested in is crafting Hemant's downfall, and I found these scenes to be sparsely more interesting and engaging than his rise. Maybe it has something to do with the thumping BG score, Abhishek Bachchan laughing like he scored a role to play Raavan in Ram-Leela, or frenetic editing in these scenes that makes them more engaging. Scam 1992 Review: Pratik Gandhi Towers Tall in Hansal Mehta’s Meticulous Retelling of the Harshad Mehta Story.

However, there is particular lack of nuancing in how the movie wants Hemant to be seen by the viewer. Instead of trying to work around his God Complex - the best way to criticise his character - what we get to see is the idea of Hemant being a social equalizer who claims to do no wrong but just merely exploited the system's weak areas - so what if he lives in a swanky penthouse with a swimming pool, and putts golf balls from there? At least, they shouldn't have given him the evil laugh, if that was the plan!  It would have also helped if the verbosity and the dramatism could have been scaled down.

The Big Bull puts two twists in the third act that ideally should have turned the opinion in the film's favour, one being Hemant's big trump card to protect himself from scams, and other the identity of his 'Vibhishana' who betrayed his wrongdoings to Meera. None of the two twists are such that you need to rake your brains over it, this leaving us with a very limp conclusion. Also for a movie backed by a big banner, The Big Bull's CGI feels errr... like CGI!

Even the performances suffer from the erratic storytelling. Abhishek had once portrayed a similar role of self-made billionaire based on a real person in Mani Ratnam's Guru with more effervescence. In The Big Bull, he simply lacks energy to make us invest in his character. Not sure what input was given to him, but Abhishek mostly ends up either offering stares or grimaces, and never making us see the cool calculative mindset of his character.

Sohum Shah, as his younger brother, also suffers from the hazy writing for his character, The movie offers only occasional glimpses of his conflicted conscience, thereby reducing the impact of what he does in the third act. Also while Sohum was decent in the role, his performance jars in an important scene in the climax of the film. Both the leading ladies - Ileana and Nikita - are good in the their respective parts , while Saurabh Shukla and Ram Kapoor add credibility in their brief screentime.

PS - How come there were so many private channels covering Hemant's news, when most of the scandal expose happened before cable television gained proper foothold in India?

The Big Bull feels like a highlights showreel of an interesting match that rushes through exciting bits, and yet feels longer than the real thing. You may get a glimpse of how a man rose out of obscurity to reach the skies, but you may never get to understand the tweaks he made to make that journey possible. The Big Bull is streaming on Disney+ Hotstar.

(The above story first appeared on LatestLY on Apr 08, 2021 07:36 PM IST. For more news and updates on politics, world, sports, entertainment and lifestyle, log on to our website latestly.com).