Varun's post featured his wife Natasha Dalal, his mother and his sister-in-law with her baby. In the first picture, we see Varun and Natasha cuddling up as they strike a pose for the picture. 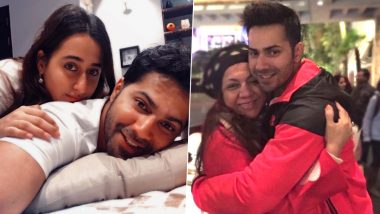 Today marks a very special day for all the women. March 8 is celebrated as International Women's Day across the globe and wishes for all the strong ladies have been taking rounds on social media. Bollywood too indulged in wishing the women in their lives on this day and joining the bandwagon is none other than our new married Varun Dhawan. The actor took to social media to share a bunch of adorable pictures with the important ladies in his life and wrote a very meaningful caption with it. Varun Dhawan in Bharat, Govinda in Jagga Jasoos, Shah Rukh Khan in Fiza – 10 Interesting Cameos That Were Cut From the Final Movie.

Varun's post featured his wife Natasha Dalal, his mother and his sister-in-law with her baby. In the first picture, we see Varun and Natasha cuddling up as they strike a pose for the picture. In the second picture, we see Dhawan hugging his mother tightly. The other two picture show Varun playing with his little niece and sister-in-law. While the pictures are super adorable, what we liked more than them was Varun's strong message in the caption.

He stated that while wishing on Women's Day is important, it is also important for all of us to make the country a safe place for all females because because 'each woman is someone’s wife, mother or sister.' Varun's picture garnered more than 4 million likes in no time. His fans applauded him for sending across such a strong message to people online.

(The above story first appeared on LatestLY on Mar 08, 2021 08:14 PM IST. For more news and updates on politics, world, sports, entertainment and lifestyle, log on to our website latestly.com).